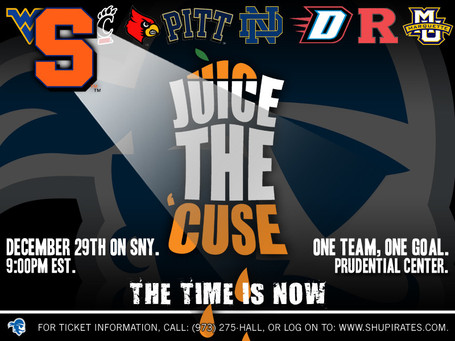 After falling short in overtime against 6th ranked WVU on Saturday, the Pirates receive the privilege of hosting the 5th ranked Syracuse Orange tonight at The Rock.  Oh the joys of the Big East conference.  As intimidating as their early schedule looks against Big East heavyweights, these are the games the Pirates will need to win if they intend to compile a conference record worthy of a tournament bid come March.  While (0-2) in the conference isn't insurmountable, it would look A LOT better if the Pirates are able to pull even at (1-1) after tonight's contest.

Saturday afternoon saw Bobby Gonzalez shake up his starting lineup, replacing the ever-consistent Robert 'Stix' Mitchell, with Jeff Robinson, making his first start for the Pirates.  Robinson, who sat out the first half of the season after transferring from Memphis, saw his first action on December 19th in a losing effort against Temple.  Two games later and he's replacing Stix (10.6PTS/5.8REB/26MPG) in the starting lineup? I understand the concept of mixing bodies to create favorable match-ups as Robinson brings an extra 50 pounds of muscle compared to Mitchell, however, delegating Stix to the bench, while only seeing 11 minutes of playing time? Questionable decision, at best.

Against WVU, Robinson finished with 5PTS/6REB/5PF on 2-of-6 shooting, while hoisting another wild 3PT attempt, something we've seen from him twice in three games now.  It might be time for Gonzo to think twice about continuously altering his starting lineup, while riding the starting 5 that delivered 8 consecutive non-conference victories.  Jeff Robinson will certainly prove to be a valuable commodity coming off of the bench, providing a fresh body and an option for Gonzo to go big when the oppotunity presents itself.

Outside of questions surrounding the starting lineup, Seton Hall is also facing questions surrounding their ability to shoot free throws after Saturday's alarming 16-of-33 performance.  Even without taking Herb Pope's 1-of-10FT stat line into consideration, the Pirates still would have only shot 65% from the stripe, a percentage that will not win you any close Big East contests.  For the life of of me, I can't understand how Seton Hall enters tonight's game as the better FT shooting squad between the two.  While the Hall is putting up a putrid 63% from the charity stripe, the Orange are checking in with 62%.  It's safe to say a, "better basketball," instructional video will not be filmed live from the Rock tonight.

Live on CBS, the Seton Hall faithful turned the Rock into a respectable college basketball environment.  The crowd was loud and alive throughout the game and the upper levels were curtained off providing assistance in displaying an actual college basketball scene, something The Hall has struggled with over recent years.  The venue tonight may be a different story.  Unfortunately, the Syracuse Orange fanbase is one of the best-traveled programs in the nation and the "close" proximity from Syracuse will certainly have a portion of the building covered in Orange.  How much of the building? I'd be willing to bet and almost HOPE that it's ONLY 50-50.  With the Seton Hall students home for Christmas break and the Prudential Center reporting a sell-out, expect the color Orange to challenge Blue and White for the most prominent color in the crowd.

Keep in mind, these two teams do not like each other as evidenced in the video below from last year's Big East Tournament.  Shout out to Sean Keely, of Troy Nunes is an Absolute Magician for the find.  In the video John Garcia and Arinze Onuaku get into a woofing match, before a hard Seton Hall foul opens up the flood gates culminating with Eugene Harvey shoving Eric Devendorf in the face.  The result of the melee? Syracuse ran away with the victory ending the Pirates season, 89-74.  Although an occasional fight can be quite entertaining, I hope to see a clean, hard-fought game from both sides tonight and may the better team walk away victorious.

For news/notes and various media previews of tonight's action, follow the jump:

For the second time in two games, ESPN has a preview of Seton Hall in action.  Don't get too excited, ESPN isn't enamored with the Pirates, but two games with back-to-back ranked opponents will call for ESPN-Previews:

That will change Tuesday at the Prudential Center, against the same opponent that dealt the Orange their first loss 10 years ago. Seton Hall ended that Syracuse team's quest for a perfect season with a 69-67 victory at the Carrier Dome on Feb. 7, 2000.

The current Pirates (9-2, 0-1) appear similarly game. Their 88.1 points per game rank fourth in the nation, just behind Syracuse. Their two losses have both come by six points, including Saturday's 90-84 overtime defeat to No. 6 West Virginia.

The SHU Athletics preview focuses on the one-sided history between the schools:

Seton Hall and Syracuse will continue their long rivalry on Tuesday with the 59th meeting of the teams.  The Orange has dominated the series with a 43-15 all-time record.  Syracuse has won the last three games, including last season's season-ender for Seton Hall, an 89-74 victory in the second round of the BIG EAST Championship.  Syracuse has also won nine of their last 11 games with Seton Hall.  The Pirates last home win came on Jan. 20, 2004.

Syracuse has already posted two 100-point outings this season and is averaging a BIG EAST best 88.3 points per contest. Seton Hall has a 134-point showing against VMI and is just behind the Orange in scoring average with an 88.1 mark, second in the league. According to cbssportsline.com, the schools are ranked third and fourth in the nation, including games of Dec. 27.

The Pirates pose two areas of concern that should scare Orange fans in preparation of tonight's contest, writes Sean Keely of, Troy Nunes is an Absolute Magician:

So right off the bat, how bout two notes to scare the bejesus out of you?

No. 1, the last time the Orange made it this far into a season undefeated (2000), it was the Seton Hall Pirates who ended their glorious run.

No. 2, Jeremy Hazell, who is averaging 21.9 points and 17.5 field-goal attempts per game.  Hazell is coming off a 41-point performance against No. 6 West Virginia in which he shot 14 of 33, including 4 of 19 from 3-point range.  Just imagine if he's actually hitting those shots.  Hazell and teammate Jamel Jackson, rank first and second in the league in 3-pointers made.

I think this game comes down to 3 areas on the offensive end where the Pirates would need to be proficient, and considerably out-play the Orange in at least 2 of them:

Donna Ditota of the Post-Standard, speaks with a few Syracuse players in regards to their preperation for the Pirates.

Jim Boeheim believes Seton Hall could be as good as anyone in the league, writes Mike Waters of the Post-Standard:

"They’ve got a great team,’’ Boeheim said. "They’ve got a lot of guys. Hazell’s a great scorer; a great shooter. (Pope) is a player they didn’t have last year. They have two good point guards. They have guys that have transferred in that are very good. They’re one of the deepest teams in the league. I think they’re really good. They’re probably as good as anybody in the league.’’

NY magazine previews each team in the Big East in time for conference play:

Seton Hall: Okay, we know that early season games don't really mean anything, but let's dream for a minute. If Saturday's game against sixth-ranked West Virginia was any indication, thanks to some key transfers (see: Pope, Herb) it's going to be a happy year for Hall fans — which is sort of a rare thing. Down by ten with 58 seconds left, Brooklyn native Eugene Harvey and Harlem native Jeremy Hazell put the game into overtime and inched Bob Huggins closer to early retirement. They lost, but still: This is not the Seton Hall that finished last year as a Big East bottom-feeder.

Jeremy Hazell found himself on the Big East Weekly Honor Roll for his performance against WVU.  Devin Ebanks of WVU, took home player of the week honors.

Hazell averaged 24.0 points and 6.5 rebounds in a week that saw Seton Hall go 1-1.  Last Tuesday, he scored 17 points and grabbed six rebounds in an easy 94-56 victory over Navy.  On Saturday against #6 West Virginia, Hazell exploded for a career-high 41 points including two three-pointers in the final 17 seconds of regulation.  The 41 points is the highest point total by a Pirate since Terry Dehere scored 41 vs. St. John's on Feb. 17, 1993.

Seton Hall is not, "that far away," from getting back to the Big Dance, writes Jeff Goodman in his blog for Fox Sports:

Gonzalez is right when he mentions trying to assimilate newcomers Pope, Lawrence and Robinson to the lineup is no easy task. "We've got to work out the kinks," he said. "It's hard for me right now to figure out which combinations give us the best chance."  "We're not that far away." If he's talking about getting back to the Big Dance, he's right.

Speaking of the Big Dance, It's never to early to start looking at Mock Brackets.  The Pirates earn a #10 seed in Andy Glockner's projection, facing off against Florida, courtesy of Sports Illustrated.

Tip-Off is at 9PM, as always, Let's Go Pirates!