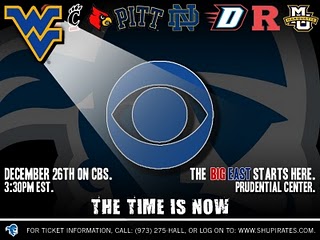 All the talk about a soft non-conference schedule for the Pirates will come to a screeching halt at 3:30pm this afternoon. The Pirates will begin Big East play welcoming the undefeated Mountaineers into the Rock with a CBS nationally televised contest.  Of course, their soft out-of-conference schedule will be mentioned numerous times by Bill Rafferty and company, however, the Pirates have a chance to put the conversation on mute, at least until March.  If things don't go well for the Hall, the talk will surely escalate to grand levels continuing through Tuesday's game with the Orange.

Seton Hall doesn't get an opportunity of this magnitude often, in fact, not many schools do.  The Pirates will go to battle with 6th ranked West Virginia, a team that is widely regarded as the best squad in the conference.  Oh yeah, on the day after Christmas, as the sole college basketball game in the country.  Oh yeah, the Pirates are at home in Newark.  Oh, yeah, it's on national television, hosted by Bill Rafferty and CBS.  No sweat and Happy Holidays.

Really, what more can you ask for? If Seton Hall is able to pull off the upset, it would set up an unbelievable showdown with the Syracuse Orange on Tuesday night.  Should the Pirates falter, expect the papers, blogs and message boards to run with the idea that this team wasn't prepared, isn't tough enough for Big East competition and did themselves a disservice with their non-conference scheduling.  We may even hear, the dreaded, five-letter word, most recently used in frustration by Herb Pope, fraud.  However, this team is NOT a fraud, never was under Bobby Gonzalez and never will be.  On a day like today, the team has a golden opportunity to prove it to themselves, their opponent, their conference and a college basketball country that will be tuning in, ready and willing to cheer for a Christmas Miracle.

Seton Hall Athletics previews the CBS nationally televised contest between the Pirates and the WVU Mountaineers taking place at the Prudential Center, Saturday at 3:30PM:

Seton Hall and West Virginia will hook up for the 25th time in the history of the match-up. The Mountaineers have a slim 13-11 all-time series lead, but have dominated in recent years. West Virginia has won four straight and six of the last eight meetings. Last season, WVU hammered Seton Hall, 92-66, at Prudential Center.

More than half (30 of 58) of Bob Huggins’ wins at West Virginia have come away from the WVU Coliseum.


When you play a ranked team (WVU #6) even ESPN will get in on the game preview action:

First, the Mountaineers, allowing 58.9 points per game, will try to slow down Jeremy Hazell and a Seton Hall team ranked second in the country in scoring (88.5 ppg).


Jon Rothstein of MSG.com weighs in with his five keys to the game that the Pirates must follow in hopes of upsetting West Virginia. Follow the link for his analysis of the five points below:

1. Protect the Glass
2. Accelerate the Tempo
3. Attack the First Pass of the Press
4. Spread the Floor on Offense
5. Mr. Pope, This Is Your Sanctuary


The Times West Virginian looks at Bob Huggins influence over the last three seasons, defining his own brand of basketball after taking over from John Beilein:

It really was amazing and something that Seton Hall has to consider today as the Mountaineers invade their Prudential Center in downtown Newark, N.J., for the 3:30 p.m. Big East opener.

This, of course, is Huggins third year here and his brand of basketball has captured the imagination of the WVU public, just as Beilein’s diametrically different brand of basketball had done when he arrived on the scene in 2002. Beilein came in and installed an intricate game based on the 3-point shot, one that had even 7-footers like Jamie Smalligan shooting from outside the arc. Rebounds? Didn’t matter. He preferred to push the game with a 1-3-1 zone and steal the ball rather than rebound it. Huggins likes athletes crashing the boards, ripping off rebounds, intimidating, blocking shots and finding ways to curl to the basket and shoot layups.


Brendan Prunty of the Star-Ledger analyzes whether the Pirates are ready for their prize fight this afternoon, with quotes from the players weighing in:

Still, the question has hounded Seton Hall this week: Are the Pirates ready for the test of West Virginia Saturday?

"I feel like we’re ready," Pirates forward Herb Pope said. "Just with the two new additions (Keona Lawrence and Jeff Robinson) it gives us that much more depth. Obviously, guys (can) come out in a funk, but they’re going to step up when it’s time to step up. We’ve got two big games in a row and everybody wants to prove themselves. We’ve got a lot of chips on our shoulders."

That chip is the one consensus thing that Seton Hall believes it has.


With a Pirates mention (and no he's not bashing Bobby Gonzalez again) is Seton Hall friend, Gary Parrish of CBS Sports:

Best game of the weekend: Nobody wants to play basketball the day after Christmas. But if you need somebody to play basketball the day after Christmas, a call like the following is a good first step: "Hey, this is CBS. We were curious if you'd like to play on national television on Dec. 26?" More times than not, you'll have a commitment within seconds. Saturday's game between No. 6 West Virginia and Seton Hall serves as proof.


Gary, today will be a great opportunity for you to check out the three men who you've labeled as, "questionable-character players" in Pope, Robinson and Lawrence.  Enjoy.