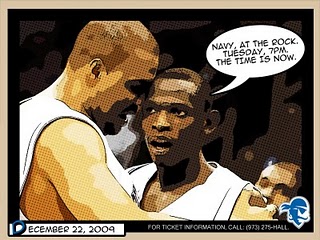 Seton Hall (8-1) will attempt to rebound as they welcome Navy (4-7) to the Prudential Center after a lackluster performance in the second half on Saturday.  Gonzo's squad managed to relinquish a 13 point lead with 15 minutes to play, amongst questionable substitutions that saw newcomers Lawrence and Robinson receive more playing time than many of the regulars.

Speaking of the regulars, if John Garcia isn't fully healthy, there's no reason to run him out in the starting lineup tonight.  There's no sense to put Garcia in the starting lineup for 5 minutes of play only to immediately relegate him to the bench for the remainder of the night.  No offense to Navy, but it's the perfect game to sort out a more permanent rotation before Big East play begins.  Let's get a good look at both Ferrakohn Hall AND Jeff Robinson, while still accounting for Robert Mitchell's playing time.

Seton Hall will also need to solidify a balanced attack among their guard rotation.  We've seen Theodore and Harvey play together, but let's get a few looks at Keon/JT and Keon/Harvey with Jamel Jackson receiving more than 9 minutes on the wing.  Like Jackson, Theodore only saw 9 minutes against the Owls, how soon we forget he was the perfect compliment off the bench early in the season.  Why was he never given that opportunity against against Temple?

Instead of the most competitive contest to date on Saturday night, tonight's contest was the proper venue to sort out such questions regarding the rotation.  Granted, the level of competition the Pirates will face tonight will not speak volumes to how they will respond against BE opponents; a victory against Temple would have done much more for SHU than what they've gained out of auditioning a rotation against a tough team.  Even Gonzalez went as far as admitting that he should have rode his guys that delivered the 8-0 record.  I trust that Gonzo will solidify the rotation after tonight's game as the Pirates have little time to prepare for their Big East schedule, with a December 26th contest against WVU looming.

This is will be only the third meeting all-time between Seton Hall and Navy with both teams winning one game. Their last match-up came only two seasons ago when the Pirates edged the Midshipmen, 79-75 at The Palestra in the semifinal game of the 2007 Philly Hoop Group Classic, Nov. 23, 2007.


A well rested Navy team will dock at the rock (awful joke, I'm aware) tonight, writes Bill Wagner of Hometown Annapolis.  Please note, Wagner didn't contrive that terrible rhyme, that was all me, however he does discuss the rest of the Midshipmen.

"I feel we're a lot better than our record indicates. We could easily be 9-2," Navy head coach Billy Lange said. "We have competed well enough to have a chance to win most of our games."


As always, the 'Piratz' preview of the contest is a must-read:

The Midshipmen have been pounded on the boards this season, being out-rebounded by a -5.1 margin per game. While Navy has held opponents to a respectable .423 shooting percentage overall, most of that is bolstered by their .282 3PT defense rate. From 2PT range opponents are shooting a robust .490 and they allow 13.5 offensive rebounds per game. Navy forces an impressive 17.7 turnovers per game, but with just a +1.1 margin.


It's no secret that the metro-area college basketball scene has been in a deep slump over the past few years, as Jack Styczynksi discusses with local coaches, including Bobby Gonzalez in a blog for The New York Times: