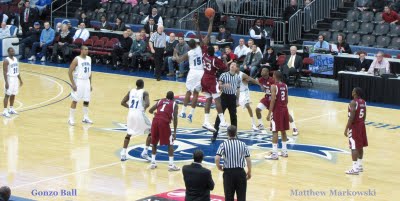 -UMass outscored Seton Hall 49-42 in the second half, luckily for the Pirates, the college game consists of 40 minutes of action. SHU led by 33 with 10 minutes left in the game, however a suddenly hot 3PT shooting Minutemen team cut the lead nearly in half, losing by only 18.

-After beginning the game shooting 0-of-14 from the perimeter, the minutemen suddenly caught fire, converting 9-of-15 to finish the game. Had UMass shot 60% from long-range the entire game, the Pirates would have been in trouble. Instead, they shot 31% for the game and never threatened the Hall's lead.

-Herb Pope was feeling under the weather prior to today's game, however he led all players with 32 minutes and 22 points scored.  He also started a new double-double streak tonight, by recording 16PTS/10REB in the first half, finishing with 22PTS/15REB/2BLK on 9-of-15 FG and 2-of-2 3PT shooting. Pope's mid-range jumper is pretty and was on display tonight. Foul shooting remains the only knack on his game as he went 2-of-6 from the stripe.

-Mr. Consistency, Robert Mitchell had 13PTS & 8REB, 6 of them offensive. He's really hustling every minute he's on the floor, you don't need to worry about Stix taking any plays off.

-John Garcia contributed 6REB & 4BLK before leaving halfway through the second half with an apparent hip injury after falling around mid-court.

-The Pirates only shot 27% from 3PT, however shot 45% from the floor. Collectively the Hall had 10BLK and 11STL compared to 5 and 3 respectively, for the Minutemen.

-Despite leading by as many as 33, Seton Hall played with intensity throughout the majority of the game, especially on the defensive end. In the first half they twice stole the inbounds pass under their offensive basket and their frenzied full-court press caused 9 first half Minutemen turnovers. In the last 5 minutes, UMass got hot from long distance closing the gap on the final score, however the Pirates played hard the entire way.  They routinely hit the glass, chased down loose balls and executed an aggressive full court press.

-Melvyn Oliver returned to the team after he was temporarily removed for academic reasons. Oliver played 9 minutes, recording 3PTS, 3REB, BLK, however his conditioning clearly needs work. Melvyn should also refrain from holding the ball at the top of the key for extended periods of time. The big fella would also be wise to never attempt a spin-move in the post again, just bang down low and dominate the glass Melvyn.

-Jeremy Hazell had 21, despite being cold from the perimeter (2-of-6) he was still 8-of-14 from the floor.  It was also nice to see Hazell notch 5 steals on the defensive end.

Lastly, this may be nitpicking, but despite having another good game, Jordan Theodore made another questionable decision at the end of the game.  If you remember, against UHa, JT attempted to drive down the lane with 4 seconds left despite his bench vehemently warning against it. The referees called a travel on JT, so this may have been swept under the rug. However, tonight, up 24 with 2 minutes left, Theodore tried to posterize his opponent with a vicious dunk attempt. Thankfully, Jordan missed.

Whether these are signs of showboating, or simply trying to make the most of his playing time, I can't be certain. Having said that, (Curb Your Enthusiasm reference) it's not like JT doesn't get his fair share of minutes. He had 26 tonight, opposed to Harvey's 29 and against UHa he had 27. Whatever the case, hopefully Gonzo will mention something to the young sophomore as it's not a big deal yet, but something to keep an eye on. It can only work to Theodore's advantage ensuring he doesn't develop this sort of reputation among his peers.