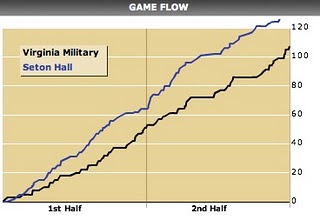 -JAMEL JACKSON.  JJAX! What can be said? This was a performance to watch, if you missed it, get yourself a copy of the tape, simply unbelievable.  Jackson was perfect through his first 7 3PT attempts, if it weren't for the shot-clock expiring when he chased down a loose ball at half-court, who knows how long he would have remained perfect.

It wasn't until his 14th 3PT attempt that he legitimately missed on a 3PT attempt.  With the talk of Keon and Jeff Robinson stealing minutes when they join the team next week, Jackson poured cement mixture on his case to stay in HEAVY rotation for Gonzo. Jamel finished the game with 40PTS! 6AST/4STL/3REB on 14-of-17 shooting (12-of-15 3PT.) He was 3 treys away from tying the D1 3PT record of 15 (of 25 attempts), set by Keith Veney of Marshall, in 1996.

-A few things were lost in the Jamel Jackson madness, first, Jeremy Hazell had a MONSTER game, recording 33PTS/12REB/5AST/4STL on 9-of-16 shooting, including 6 3PT.

-Another double-double for the ever reliable Herb Pope, who took the breath away from Pirates fans when he took a hard fall and was pulled from the game early in the 2nd half.  Pope would later return and looked fine, ending the game with 15PTS/20REB!/4AST/3BLK.

-For the first time this season, both Harvey and Theodore were non-factors. The elder PG finished with 10PT/4AST/5TO in 23 minutes, you can't ever finish with a negative assists to turnover ratio.  JT put up 2PT/6AST in 22 minutes.  I guess it was the right time for them to have quiet games as Jackson and Hazell dropped 73 between themselves, providing more than enough offense for their teammates.

-Mr. Consistency, Stix Mitchell, lived up to the moniker that I've assigned to him, with a solid stat sheet of 18PTS/4REB/5AST/3BLK.  We even saw Stix run the point-forward for times in the second half as the Pirates occasionally went without a true PG on the floor.  Stix did a pretty good job in his new role, committing only 3 turnovers throughout the game.

-When Melvyn Oliver entered the game for the first time, VMI began their late 1st half run, ending the half on a 14-3 run and the Pirates were -9 with Oliver in the game.  At one point in the second half, he built the differential up to -15, before he finally started to play better.  He finished having made all 3 of his shot attempts and was even finishing strong around the rim, drawing an and-1 penalty, despite missing the free throw.  He finished with a respectable 8PTS/4REB/2AST(one was extremely pretty) and 2BLK, not a bad line for the big fella!

-Defense.  Defense.  Defense? Where was it? What happened? VMI put up 107 against the Hall? Yes, they've led the D1 in scoring for 3 consecutive years and are leading the nation again this year.  Too bad.  At times it seemed like the Pirates were content with VMI scoring as they knew they would out shoot them when it was said and done.  VMI should not have scored 107. Period. Where was the devastating press that we've seen most recently against UMass? The defensive intensity was not there, as again, it seemed like the Pirates were fine with the idea of trading buckets all afternoon.

They got away with it this time, they allowed their opponent to put up 107 in a laugher... that they won. You won't see that happen everyday and you shouldn't, they need to play better on the defensive end, there's not enough that can be said.  Despite winning in blowout fashion, if they develop the tendency to allow teams to play their own style instead of forcing their defensive will on the opponent, they'll find themselves in serious trouble in Big East play.  Having said that, Jamel Jackson!