Contrary to Adam Zagoria's first report, he is now reporting that Seton Hall guard Jeremy Hazell was actually shot just one time under his right arm on Christmas night, but is currently in his home resting.  Updated information here. 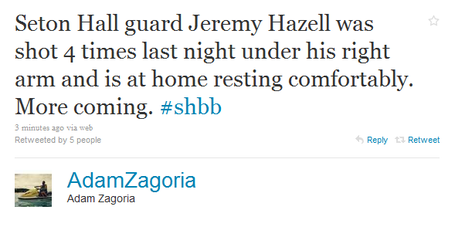 Zagoria, in an article on his website, reported that Jeremy Hazell had been shot during an attempted robbery in his Harlem, NY home last night.

I think we can all breathe a sigh of relief right now and chalk this one up to more bad luck, but this had potential to be incredibly disastrous. We wish Jeremy the best of luck in his recovery.