Today marks the official launch of Retro College Cuts, 'the only brand that loves college basketball as much as you do!' Available for purchase now are retro 1989 Seton Hall Pirates game shorts.  These shorts are the replica home uniforms that the Pirates rocked in the finals and can ONLY be purchased from RCC.

I received my pair about a week and a half ago and they feel and look as close to authentic game shorts as you can get.  These shorts have a superior weight and thickness to them that is sorely lacking in basketball shorts today.  These immediately became my go-to apparel for game day and as the Pirates defeated St. Francis on Saturday night, they've now become my designated good luck shorts that I will wear until we lose.  I hope my washing machine is cranking overtime this weekend for the Charleston Classic! 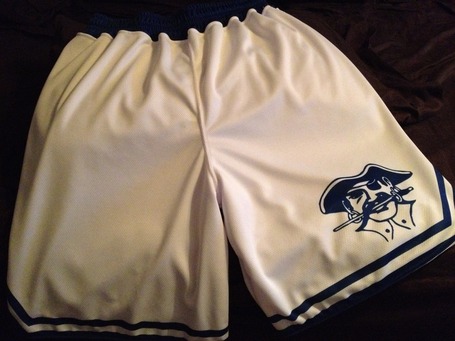 Unfortunately, I haven't been able to ball in these yet, but in wearing them around the house, the custom fabric blend sure seems as if they'll be as breathable on the court as they are on the couch.  In really stretching to find something I would have done differently in designing these shorts, I would have included the white strip through the middle of the blue waist band, as these come with a solid blue waistband.  Then again, if you plan on tucking your shirt into your waist band on the playground, you've got bigger problems than the color of the band.  These are a must-purchase for all Seton Hall fans and alums alike.  Christmas is right around the corner and you honestly couldn't buy the Seton Hall fan in your life a better gift.  Go get em!

After losing to Syracuse in the Big East tournament, coach P.J. Carlisimo took the 1989 Seton Hall Pirates on a magical run, ripping off five wins against Missouri State, Evansville, Indiana, UNLV & Duke before eventually falling to Michigan by a single point in the 1989 NCAA finals. The best team in Seton Hall history was led by a cast of players including Andrew Gaze, Ramon Ramos, Nick Katsikis, Gerald Green and Anthony Avent among others.

These replica game shorts are from the 1989 season and are designed after the home uniforms the Pirates wore in the finals.