As reported by Adam Zagoria: 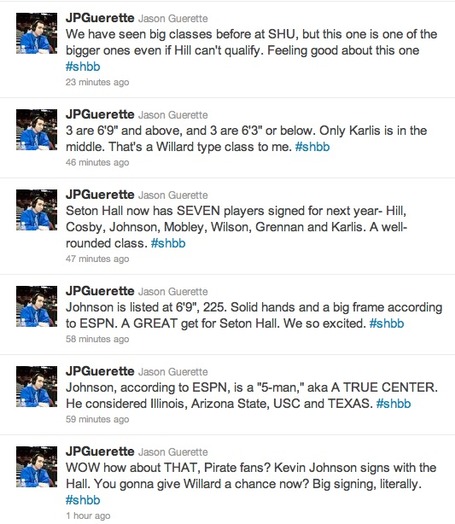 Although new Seton Hall signee Kevin Johnson's grades have been shaky, I'm hearing that he will end up qualifying.

More to come in the morning, for now, view Kevin's ESPN Inside profile after the jump.  It's been a wonderful week and from all of us at South Orange Juice, welcome aboard Johnson and Mobley!

Strengths: Johnson has a huge frame with broad shoulders and knows how to utilize it in the paint area. He is a 5-man with solid hands and does a nice job of establishing position on the low block. He is very comfortable turning over his left shoulder and using his strength to finish with contact. Despite not being overly quick he goes after every rebound and he's a solid shot blocker. Johnson will not wow you with above the rim plays, but he does give an honest effort at both ends and is a tough post defender.

Weaknesses: Johnson is a physically imposing prospect, but he doesn't have a lot of bounce and his feet are just average. He plays too straight up and down most of the time and he really needs to learn how to bend his knees to get more on balance. In addition, he brings the ball down far too often where the guards can slap it away.

Bottom Line: Due to the dearth of big men on the west coast and the country for that matter, Johnson will be a highly sought-after recruit. He has the frame and physical toughness to play at the high major level, but his fundamentals and skill set need polishing to compete consistently against the rest of the country.