Connecticut headlined the NCAA's release of their APR scores for the 2009-10 season yesterday. The defending National Champions were officially sanctioned with the removal of two scholarships for the 2012 recruiting class just a week after visiting the White House. Tack on Connecticut's NCAA violation earlier this year and the program will only have ten scholarships to give for that class.

Outside of the Huskies, who finished with the lowest multi-year rate in the Big East by a wide margin, Seton Hall finished 13th with a multi-year rate of 935, ten points above the cut-line of 925. DePaul finished with a perfect score of 1000, highest in the Big East and one of only six schools to do so. Most impressive of the perfect schools is Butler, who reached the National Championship game last season.

Here are the scores for all sixteen Big East schools, sorted from highest to lowest: 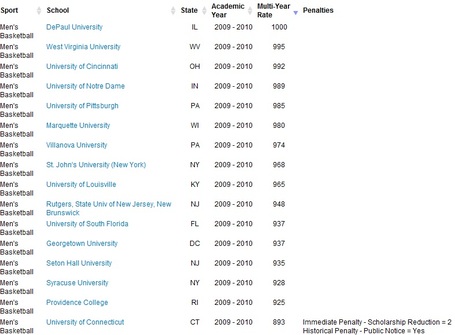 Seton Hall's basketball team actually had a single year APR of 896 for the 2009-10 season, which is certainly not sustainable over several seasons. However, due to scoring high enough in the previous three seasons, the multi-year average (four season average) stayed above 925. Here are the multi-year averages for Seton Hall since the APR was instated:

Its important not to confuse those numbers with the individual scores for each season. Those are the multi-year rates which are comprised of the single year APR numbers. Confusing, I know.

While Seton Hall's APR score is hovering dangerously close to the cut-line, don't expect that for long. It seems as though the majority of Kevin Willard's recruits are great students. Additionally, the APR is probably skewed because of, how should I put it... a high level of player movement over the last few seasons. Transfers, players leaving the team, and early NBA declarations affect a school's APR score.

I wrote a brief piece over on my site about the six teams who were sanctioned this season. If anyone has any general APR questions, ask away. This stuff is admittedly rather confusing.