Jeremy Hazell's path to the NBA got off to a rough start after he opted out of attending the Portsmouth Invitation due to his injured wrist not being fully healed. Yesterday, Hazell started his first of four workouts with NBA teams before the NBA Draft on June 26th. Hazell's first workout was with the Golden State Warriors, he will work out with the Sacramento Kings on June 4th, the Memphis Grizzlies on June 12th and with the New Jersey Nets on June 16th.

According to Ryan Feldman of TheHoopsReport, the Warriors' Director of Player Personnel Travis Schlenk had good things to say about Hazell: 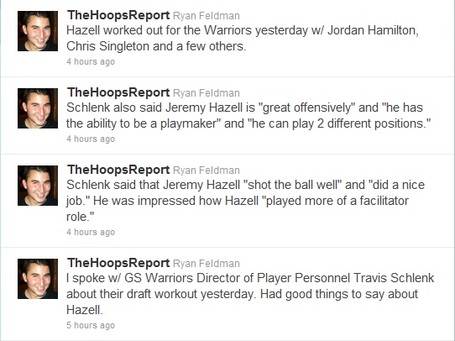 While the information is limited, it seems like Hazell did a lot of the little things that he developed over his four seasons at Seton Hall. I will keep an eye out for Feldman's scoops on how Hazell does at his future workouts.

According to our own John Lopiano, Arizona Wildcats transfer Lamont "MoMo" Jones was spotted on campus today talking to head coach Kevin Willard. The information was confirmed by another source that Jones was indeed on campus with former Seton Hall assistant Dermon Player.

With St. John's out of the MoMo Sweepsteaks because of his former relationship with Red Storm assistant Moe Hicks and Connecticut no longer pursuing the guard, it seems like Seton Hall is the last local major conference school remaining.

If Jones were to look outside of the New York City area, he would certainly not be granted his waiver to play immediately, as his transfer could not be justified by his desire to live close to his grandmother.

Its interesting that Jones was on campus today because the whole situation had cooled down over the last few days. As most of you already know, Willard and his staff prefer to operate in relative secrecy (Canarias Basketball Academy, for example) on the recruiting and transfer trails. Connect the two together, and something is certainly brewing here.

On the topic of transfers, I'll say it right now: Expect at least one of Gene Teague (Southern Illinois) or MoMo Jones (Arizona) to choose Seton Hall in the coming weeks. Teague's situation has gone surprisingly quiet (no release was ever announced publicly) and Seton Hall is the last local major conference school that is talking to Jones. He has also been mentioned with local schools such as Iona & Hofstra.

If Jones were to receive a waiver, he would be eligible to play immediately. If not, he would have to sit out the 2011-12 season. Jones will have two years of eligibility remaining regardless.

According to multiple sources, 2012 target Kareem Canty (Brooklyn, NY) is taking an unofficial visit to Xavier tomorrow. Xavier and Seton Hall have been considered his two favorites of late. In case you missed it, Canty's recruitment has blown up recently.

Canty took an unofficial visit to Seton Hall on May 18th. Without releasing any direct quotes, Canty had a really good visit, his main recruiter is Shaheen Holloway.

Maryland has also asked Canty to visit College Park, according to Calvin Muhammed, coach of the Long Island Lightning.