Since we are currently in only one of two AAU live periods during the calendar year, recruiting news has been all over the internet. With a jam packed slate of AAU events not limited to this list of headliners, head coaches, assistants, high school players and recruiting analysts have been all over the country within the first two weeks of this busy month.

Unfortunately, I haven't personally attended any events (I was going to attend the Reebok Challenge in Philadelphia but I haven't yet moved into my apartment near Philly). To make up for it, I have been scouring the blogosphere for as much information as I can on how the Seton Hall targets are performing, if they've narrowed their lists and any new targets that have popped up on the recruiting trails.

The following is a summary of what took place during the first half (July 6th - July 11th) of the first live period.

The event opened to college coaches on July 6th, Kevin Willard & Shaheen Holloway were in attendance for the first day of the event.

Here are links to stat lines from Seton Hall targets on Day 1 of the Reebok Camp (they haven't published beyond Day 1): Picture 1 & Picture 2

For more on the Lebron James Skills Academy, the Hoop Group Elite Team Camp and more, follow the jump.

Willard and Holloway were found by Adam Zagoria watching over 2012 must-get Kyle Anderson:

Adam Zagoria also sat down with Kevin Willard to talk recruiting and such while in Akron.

There wasn't too much information on my Twitter feed about the Adidas Invitational and only one bit about Javan Felix, who attended the event. Additionally, I emailed the Invitational staff for a complete roster (there was none on their site) and was not answered.

St. Anthony (Hallice Cooke, Kyle Anderson, Josh Brown) won the tournament over Neumann-Goretti 61-53. I watched a few minutes of the game on the internet and Kyle Anderson was fantastic: 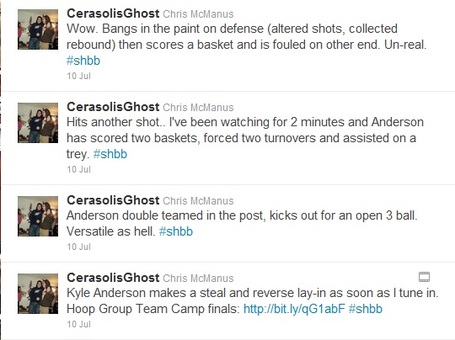 Here is an awesome mixtape of Kyle Anderson at the HG Elite Camp.

As you probably already know, Anderson decided that his college decision deadline will be September 20th. He told NBESports this weekend that Seton Hall is still recruiting him the hardest.

Coach Willard tweeted to me yesterday morning that he would be attending this event and then travel to South Carolina for the Nike EYBL Peach Jam today.

Coach Willard left for the Peach Jam this morning. There are twenty Seton Hall targets who will be playing in the event, here is the list (AAU team in parenthesis):

Here is a quote from NBESports from Cooke about Seton Hall:

They’re actually recruiting me the hardest, show me the most love [and I] came to a couple games and stuff . . . Like the situation, like what Kevin Willard does with players. Plus, I’m from Jersey.

Look forward to one or two more pieces like this that recap the Peach Jam and the second live period in July (22nd -31st). There is still plenty of AAU basketball to be watched, players to be targeted and relationships to be formed by the Seton Hall coaching staff. We'll try to cover as much as we possibly can.