Kyle Anderson took an unofficial visit to Seton Hall on Thursday and by all accounts, it went as well as it possibly could have.  Then again, when is the last time a visit didn't go well?  I couldn't tell you the last time I've read about a "bad" visit reported from either side.

Kyle arrived on campus mid-afternoon and met with various members of the staff throughout the day.  During parts of his visit, he was accompanied by his Paterson Catholic buddies, Fuquan Edwin (former teammate), Jordan Theodore (alumnus) and former POINT GUARD (assistant coach and St. Pat's product) Shaheen Holloway.  I've heard varying reports on the reaction from the student body.  Apparently, one member of the coaching staff was upset at the initial reaction given to Kyle earlier in the day.  However, that quickly changed as reports began to surface that had the student body, "giving standing ovations" and "hanging out windows chanting his name."  One source close to the staff stated simply, "rock star on campus."

Kyle took to Twitter to weigh in on the visit: 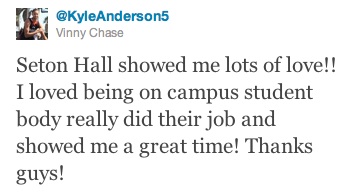 After touring the campus, Kyle watched portions of team workouts and came away very impressed with what he saw. As mentioned above, Anderson has existing relationships with members on the current roster and I'm told he really fit in well with the team over the course of his visit.  Whether Seton Hall comes away winners of the Kyle Anderson sweepstakes or not, the staff, student body and University need to be applauded for a tremendous effort that has been put forth by all.

One final positive note to keep in mind, as reported by Adam Zagoria, Seton Hall will have the last in-home visit before Anderson's decision day.  They'll be given the ball in the bottom of the ninth, will they be able to shut the door or fall victim to a walk-off defeat?  We're less than three weeks away, take a seat, it's going to be a long eighth inning.