Share All sharing options for: For Sale: The Official SOJ #hallsohard T-Shirt!

Last week, South Orange Juice released the official, #hallsohard #thatSHUcray T-Shirts via the link to our store in the right hand sidebar. I had the folks at SBN and Custom Game Day Depot load the shirt after the DePaul game and I planned to make a formal announcement following the NEXT Pirates victory, when I could once again use the hashtags appropriately. Unfortunately, ten days later and that day never came.

Yesterday, it was brought to my attention that someone created a knock off using MS Paint and began selling their variant during a losing streak - how dare they! For that reason, (and the fact that I'm leaving for vacation), here's your formal announcement. Let's hope the Pirates see these Tee's flooded around South Orange (and Newark), and once again remember the swag they displayed during their first 17 games this season. Have at em! Purchase one and rock it when you're protecting The Rock! We need more blue in the house and what better way than to sport the hashtags! 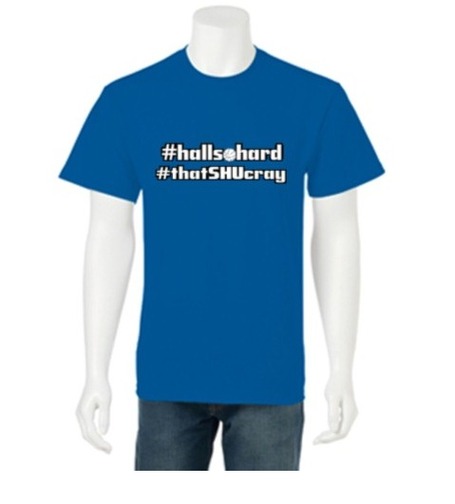