One if by Land. Two if by Sea. Two-Thousand-Thirteen if by Carr.

Seton Hall's opponents might want to use the preceding warning in their midnight game planning of the Pirates' direction with their new found 'crime stopper,' Aquille Carr.

This afternoon, the 2013 PG out of Patterson High School in Baltimore, Maryland tweeted the words, "Seton Hall." At first glance, I almost didn't believe my eyes. Immediately, I thought to myself, he must be clarifying one of the schools on his list, there's no way. But, I was wrong. Just as I wrong during the entire Carr commitment, there was no way Seton Hall was going to land the, "Baltimore Crime Stopper," the, "Most Exciting Player" in High School/Nation, but, we did. Egg. Meet. Face.

Kevin Willard, scrutinized by many on internet message boards or talk radio (I'm talking about you - the guy who calls Hall Line after every game and says, "why does recruit X want to go to Syracuse? It snows there) did get in done. That said, he's got to share the credit. First, his whole staff and administration, deserves a standing ovation for the tireless work they put in on the trail and the court.

One assistant in particular, Chris Pompey, has been mentioned numerous times by us on Twitter and on SOJ for putting in work; tirelessly scouting recruits out of the DMV area. It's safe to say that work has paid off and the mastermind behind the Carr commitment deserves a toast from the fans of the Seton Hall basketball program. Of course, that isn't to take anything away from Kevin Willard, he did a hell of a job bringing Carr on board, I just wanted to spread the recognition around. In confirming Carr committed to Seton Hall and his verbal was accepted, one source told me this afternoon, "Yes, Coach Pompey did a great job." Yes, great job, indeed.

Follow the jump for visuals on how this played out this afternoon. 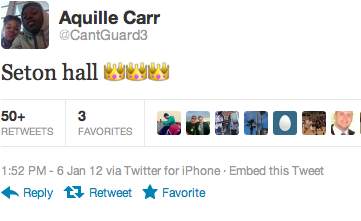 Yes, straight and to the point. Seton Hall, folks.

The kid who received the nickname, the "Crime Stopper" for bringing the city of Baltimore and it's crime rate to a furious halt during his games is on the road to South Orange, New Jersey. Maybe we can bring down the SO and Newark crime rate, as well.

Yep, while every college basketball writer in the nation scrambled to hit up their sources for confirmation, there would be no need. Carr did it himself.

Then, current captain, Jordan Theodore reached out to the newest member of our Pirate family:

There you have it. A few hours later and after numerous confirmations from multiple sources, assistant coach of Patterson High School, Ed Lewis, tweeted the following:

In a subsequent tweet, Lewis replied that people were, "just speculating," and Carr's announcement would come next Thursday at 10:30am at Patterson High. It's pretty apparent to me what happened here.

Carr announced his decision on Twitter and after seeing how large the reaction was, his high school decided they should have made an event out of it. Why wouldn't you bring in the cameras, take a few pictures and make a day out of it? It's a good idea in principle, but unfortunately, for them, the player had other ideas. Look no further than Carr's Twitter bio:

We'll have much more on Seton Hall's newest Pirate on Twitter and SOJ over the next few days. For now, here's some quick hits:

(If you don't have goosebumps after watching that, get your epidermis checked, son)