It's the Monday after Selection Sunday and that means one thing -- it's time to start filling out brackets. We'll get to that later, but for now, let's look at the projected path your Seton Hall Pirates are facing in the National Invitational Tournament. For starters, if you were lucky enough to miss THE selection show(s), the Pirates name was called, except at 9PM, opposed to 6PM. If you were drinking the pain away and missed the NIT selection show, the bracket looks a little like this (click to enlarge): 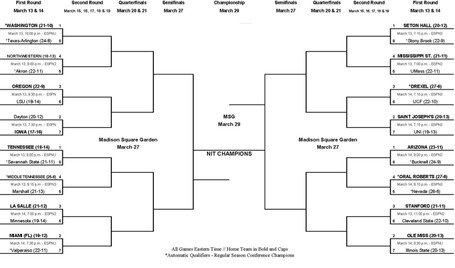 Hit the jump and we'll explore the path Seton Hall will take as they embark on their quest to Madison Square Garden.

Although the NCAA Selection Committee deemed the Pirates their 5th team out, the NIT committee thought otherwise, granting them a #1 seed in their region. As the top seed, the Pirates will have home court advantage throughout their region leading up to the semi-finals (Final Four), hosted at Madison Square Garden.

Not only will the Pirates stay home as long as they keep winning, but they'll also be playing on campus for the first time in over a decade, at Walsh Gymnasium and it's capacity of just 2600. Additionally, tickets aren't available to the public for the games hosted at Walsh. Only season ticket holders and students are able to purchase tickets to these games, preventing fans of the opposition from coming in and taking over the arena. I'm told opposing schools will have a very small allotment of tickets, which I imagine would first go to family and friends on the respective teams. Staying home is nice, but it's a moot point unless the Pirates show up and win ball games. Below is a look at their projected path through the tournament and my predictions.

SOJ's Jason Guerette previewed tomorrow's contest, his keys to the game include:

- Walsh is Rocking. Seton Hall has won 20 straight games on campus, but hasn't played a meaningful home game at the historic Walsh Gym since December 4th, 2000 (in that game, the late Eddie Griffin, then a freshman, recorded the only triple-double in school history against Norfolk State as Seton Hall won by 10). Because this is a rarity for Pirate fans, if the place is packed (which I think it will be), and is loud like Walsh has been known to be when you get that many fans into the place, it will buoy the Pirates to victory. Pack Walsh. Make it loud. Support your team.

A defensive battle in the first half gives way to Seton Hall's athleticism in the second half. Herb Pope leads all scorers with 18 and Geramipoor infuses 4 points of offense in his return to the rotation.

The second round matchup worries me more so than the subsequent contest in the quarterfinals. The Bulldogs, a team that was up for a six-team vote with Seton Hall (among others) had Xavier held on yesterday, match up very well against the Pirates. Herb Pope will have his hands full with 6'11 Arnett Moultrie, who is joined by his senior do-everything type point guard, Dee Bost. Both players average 15ppg and will go toe-to-toe with Jordan Theodore and Pope, but the Pirates hold on in a nail-biter.

The rematch with St. Joe's will be an offensive display treating the Walsh faithful for packing out the gym for the third consecutive game. Aaron Cosby makes up for his 0-for-7 against Louisville in the Big East Tournament and leads the way for Seton Hall, netting six 3-pointers en route to an easy Pirates victory. It's onto MSG.

Statistically speaking, these teams are spitting images of each other. The Wildcats hold the edge in PPG (69.8 - 68.6), while the Pirates dish out 14.1 dimes to Arizona's 13.7. Both teams average 35.5 REB and shoot the rock at a 44% clip. The Pirates and the Wildcats put on a thriller to open the semi-finals with Seton Hall advancing to the championship after a period of free basketball.

The Hurricanes come out firing and stun the Pirates, leading by ten at halftime, just as they did against Rutgers in November. But, the Pirates aren't the Scarlet Knights, (hence their absence in postseason play) and turn up the defensive effort following halftime. Fuquan Edwin records 4 of his 6 steals in the second half and propels the Pirates to another close victory. A banner gets raised at Walsh prior to an exhibition contest next season. Herb Pope and Jordan Theodore are in attendance.

There you have it. NIT-or not, you know you'll be locked in when the Pirates resume play tomorrow night. Don't act any differently. That said, everyone of us will also watch March Madness, despite what we may have vowed last evening. If you're planning on filling out a bracket, we invite you to do so over at SBNation's, "Wisdom of the Crowds" bracket hosted at Yahoo! If you don't, we don't want to hear what your bracket looks like. 'Picks' or it didn't happen.

Yahoo! Tourney Pick'em supports SBNation and the best college sports tournament of the year. Join the bracket pools of Drew Brees, Michael Phelps, and Lil Wayne-- all while competing in the $5 million Perfect Bracket and $10,000 Best Bracket Sweepstakes. Be part of the best and biggest Yahoo! Sports tourney game yet – sign up today!