According to his Twitter account, prized Seton Hall recruit Aquille Carr will opt to play basketball overseas instead of attending college at Seton Hall. The news comes days after Seton Hall's other Class of 2013 commit, Jerron Wilbut, was arrested and charged with robbery in Illinois. 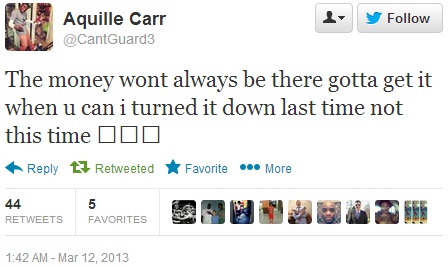 This news shouldn't come as a surprise to anyone who has shown light interest in the journey of Aquille Carr. Here is a rough timeline of the Carr saga:

Spring of 2012 - Rumors privately circulate that Carr has grades poor enough to prevent him from qualifying.

March 27th, 2012 - Carr decides to transfer from Patterson HS (Md.) to The Patrick School (N.J.), publicly reinforcing the rumors of his poor grades.

Late Summer, 2012 - A majority of fans close to the Seton Hall program know the academic hot water that Carr is in.

August 17th, 2012 - Aquille is arrested for assault on the mother of his child.

September 19th, 2012 - Carr is handed a deal that says the assault charges will be dismissed if he completes a 22-week program with the House of Ruth (a domestic violence center near Baltimore.)

October 31st, 2012 - Another transfer? Aquille decides to transfer to Arlington Country Day (Fla.), but never enrolls in the school that is hundreds of miles away from the House of Ruth.

Mid November, 2012 - Curiously, Aquille does not sign with Seton Hall in the fall signing period. I publicly declare the extreme doubt that the Carr situation is in. Carr tells Adam Zagoria that he "could have signed yesterday."

Late February, 2013 - Carr proclaims that he is still considering playing professional ball but that he is committed to Seton Hall at the same time. We're in garbage minutes now, send in Pete Dill.

March 11th, 2013 - Aquille publicly states on his Twitter account that he will play professionally overseas instead of attempting to play in college. The End.

It was clear as day, at least to me, that something odd was at play since the day Carr committed to Seton Hall. His ability did not match the interest he was receiving on the recruiting trails, which did not match the school that he committed to. It was known in recruiting circles that Carr had poor grades, hence why a low high-major like Seton Hall rolled the dice on Carr. Stronger programs have the option to overlook players like Aquille and go after kids with steady academics and stable lives.

So, with just over a month until the spring signing period (April 17th), here are a few recruits that may be front runners to replace Jerron Wilbut and Aquille Carr.