Share All sharing options for: Seton Hall - South Florida: Some Kind of Monster

Words can't really describe what last night was, or can they?

Starting at a very basic level, last night was definitely a thing. Beyond that, I'm not sure that I'm qualified to accurately describe what that thing was. A basketball was involved, but that basketball did not go through the hoop very often. Conversely, that very same basketball changed hands quite a few times, 24 times to be exact. One of the teams tried to throw the basketball through the hoop and missed 50 times (I started counting these misses on my fingers and toes but ran out of appendages 1:40 into the second half), but somehow kept getting the basketball back from these misses -- 21 times to be precise. This very same team appeared to be wearing bathing suits instead of a uniform. They also had tanned, attractive females cheering them on. Must have came straight from a beach. Anyway, the opposing team that wasn't from a beach had a very big player on their bench who wasn't cheering or anything. In fact, he may have been in the wrong building, he looked a little lost. Lastly, I vividly remember that I didn't do much cheering at this thing/game until the non-bathing suit team accumulated 30 points. I exploded with joy when this happened. People looked at me funny.

That's the best I can do to describe this thing that happened last night. Fellow writer Rob Manganaro has a better memory than I. He claims Team Bathing Suit lost to Thing 1 46-42. Here is what some national writers had to say (reads from top left to bottom right, click either image to enlarge): 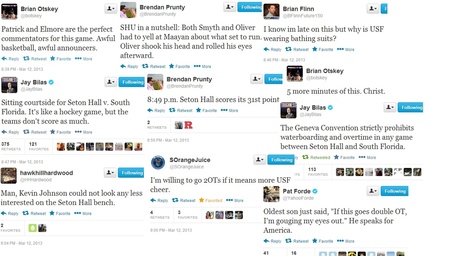 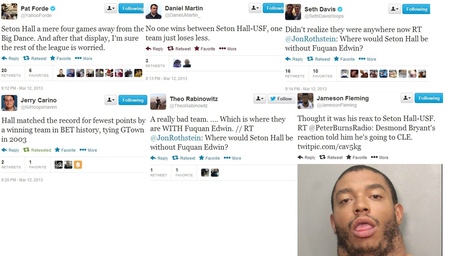