Under-recruited out of high school, junior college guard Bobby Hunter is a few weeks away from finally being able to play at the Division-I level.

"I wasn't recruited a lot out of high school," said Hunter, who graduated from Reno, Nevada's Bishop Manogue. "A lot of the schools wanted bigger guards. I'm 5-9/5-10, and they wanted a 6-1/6-2 guard. Some of them [bigger guards] didn't have the talent that I have, but they [D-1 schools] chose who they wanted." 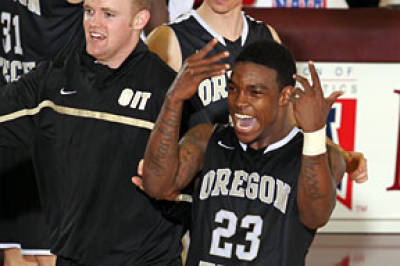 Now, after scoring 20.2 PPG at Oregon Tech (NAIA) en route to a National Championship in 2012 and putting up 25.2 PPG at Santa Fe JC (Gainesville, Fla.) this season, Bobby Hunter is attracting the interest of several mid- majors and one high-major school. "My top four-to-five choices would be Seton Hall, Iona, Evansville, Illinois State, and Murray State. Those are the schools I've been talking to quite a bit."

Iona, Evansville, and Murray State have all offered Bobby.

"Seton Hall is definitely standing out," said Hunter, when asked if he had a favorite. "One, they're a private school, that's where I went to high school - I went to private school. The type of education that is going to be there [is important], plus the program. They've had their ups and downs, but they're a decent program - I like that."

After asking Bobby to go more in-depth about the five schools he is considering, he concentrated on Seton Hall and Illinois State.

"I kind of want to be around a city, and I know Seton Hall is close to New York and I've always wanted to go to New York, so that would be cool."

Bobby Hunter has built his game around high-tempo action, an attribute that gels with Iona (8th) and Illinois State (25th). "I'm more of a combo guard, but scoring is just natural. I was raised playing fast tempo and full court press -- get the ball out and score. So that's the mentality that I've had," said Hunter. "I get a lot of my points from deflections and stuff like that - steals -- getting out on the rush. Once I start attacking the hole, that's when my jumper opens up."

However, his outside shot is something that Bobby has admitted he must work on before next season. "[My main weakness is] Being more efficient from the three-point line. I get to the hole, I shoot a lot of free throws. Don't get me wrong, I do knock down a lot of threes, I just need to be more efficient and more consistent doing that."

Going forward, Hunter hopes to be ready to sign a NLI on April 17th, the first day of the spring signing period. He is currently in the process of setting up a visit to Iona early next week and has no other visits planned.