Generally speaking, Kevin Willard is a quote machine. Last night he kept it brief, but had some stand out quotes - the first of which, of course, was the one that garnered the most attention.

If you had told me six months ago - after a miserable and injury plagued season - that Kevin Willard would receive a standing ovation the next time he'd speak in front of the Seton Hall faithful, I'd say you were diseased in the head; but, that's exactly what happened last night at the annual Beefsteak dinner.

With the college basketball season set to officially begin on Friday, there was a palpable buzz in Walsh Gym. This buzz, of course, was due to the recent recruiting successes Willard and his staff have enjoyed on a national level in recent weeks. In case you've been living in a cave, or perhaps Aquinas Hall, Seton Hall currently boasts the 4th best recruiting class in the nation, per 247 SPORTS.

Generally speaking, Kevin Willard is a quote machine. Last night he kept it brief, but had some stand out quotes - the first of which, of course, was the one that garnered the most attention.

"If anyone in attendance has a top-10 kid out there, I'll hire you too."

Me: "What are your expectations for the team this year?"

KW: "I don't want to say number of wins, but I'm confident we will do well. Very well. This team is really going to surprise people, Rob."

"The Big East has more top 100 recruits than any other conference, I think. The TV exposure is outstanding."

"Our facilities are equal to anyone's now and that's really helped us with recruiting."

"We've had some good news this year [recruiting] but I'm so excited about the guys in this room. This is going to be a good year."

"We have great senior leadership this year. This is going to be a very strong team."

"We have 13 healthy bodies, finally. Last year was a really bad, tough year, but to their credit, [our players] had a great attitude. The locker room was great."

"Man, yeah, next year is going to be crazy [with the recruits coming in], but this year, I'm so excited about this year, man."

"We have the best media contract I've ever seen. The state of our program is quite strong."

Other notes and quotes:

This sold-out event raised over $85,000 for Seton Hall Athletics.

Patrik Auda told me he is ready to practice and play, but that his foot injury has really been "a nightmare".

Brandon Mobley told me he is "100%". I asked him if he could play without restrictions and he said, "Yup, I'm ready to go." Of course, this is not good news for the other 9 teams in the Big East.

Gene Teague is markedly thinner, svelte, even. He had trouble above the rim last season, that was evident, so the roughly thirty pounds he's shed over the summer should bode well for his overall agility and leaping ability (below photo is of a slimmed down Gene Teague and Fuquan Edwin). 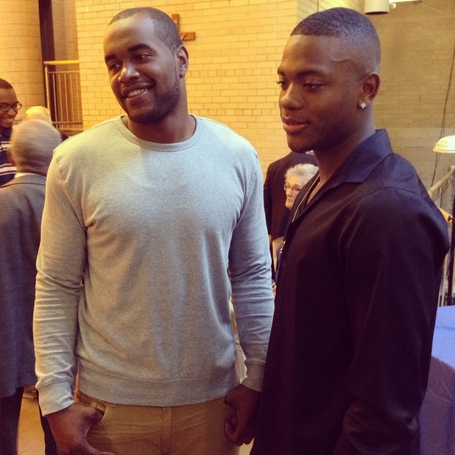