The July live recruiting period kicked off yesterday at 5 p.m. at the Reebok Breakout Classic on the campus of Philadelphia University with over 150 division one coaches including Seton Hall's Shaheen Holloway in attendance.

The event runs in a showcase format instead of registered AAU teams. The 120 players are broken up into 12 teams of 10, all of which play one game during each three-hour block. After staying on court two all of yesterday, here are my observations. 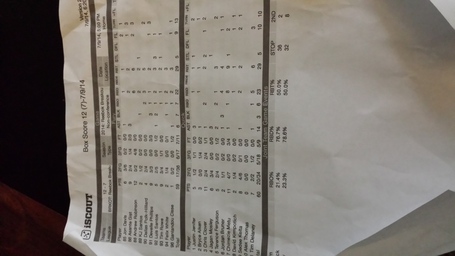 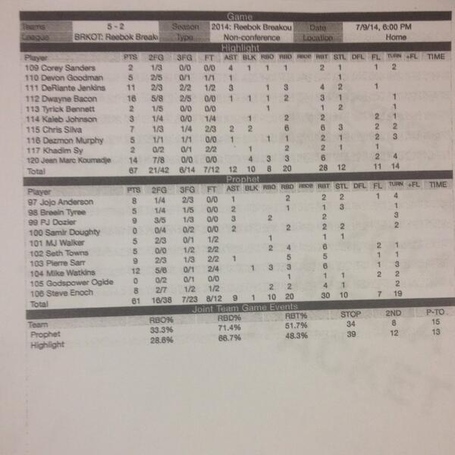 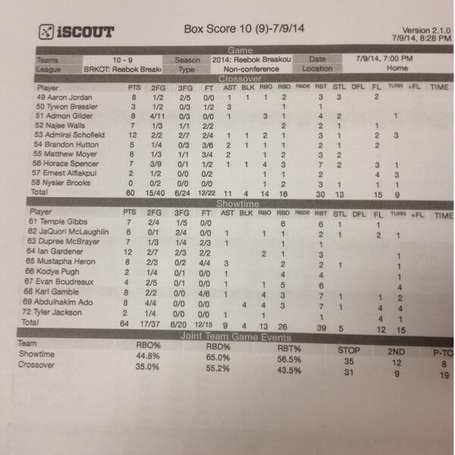 2015 forward Tim Delaney (7 pts, 6 rebs) - Fit the typical Jay Wright do-everything forward as Jay Wright and an assistant checked in on their 2015 commit from the bleachers. He is a nuisance on the offensive glass, has a strong frame that can be improved upon, can run the court, threw an on-target full court outlet pass, and can stretch his defender to the perimeter. Delaney's move from his hometown Pitman high school to Blair Academy (N.J.) should help his development prior to joining the Wildcats next summer as the south Jersey public school played weak competition. Delaney also runs with WE R1 on the AAU circuit.

2015 guard Dwayne Bacon (16 pts, 3 asts) - Dwayne looked like he was having fun out there with Showtime Ballers teammate Corey Sanders assisting on several of his made buckets. Bacon returned the favor by assisting on an off-the-backboard slam to end the game. All of that was captured here:

Bacon is thought to be a Florida State lean by 247Sports.com and the Seminoles were also being whispered in the stands.

2016 guard Bryce Aiken (3 pts, 1 stl) - The Patrick School guard had an off day yesterday with his usually deadly outside shooting not falling. When Aiken gets in rhythm he has surprisingly long range. Bryce's diminutive size is a slight disadvantage to him when defending, especially against powerful guards. We should see better performances from the close friend of Seton Hall forward Angel Delgado as the event goes on.

2015 forward Chris Silva (7 pts, 6 rebs, 3 stls) - Silva's listed height of 6-foot-9 can be deceiving as he is a developing back-to-basket power forward. While he isn't the bruising force in the paint that you'd expect, Silva is surprisingly agile and quick in the paint. Chris played alongside 7-foot-3 Montverde Academy (Fla.) center Jean Marc Koumadje, who is hungry to block everything and dunks like it's the easiest thing in the world. Here he is in action. Jean Marc earned UConn and Tennessee offers right after his game yesterday and should have every high-major calling for the 7-foot-3 2015 prospect before the Breakout Classic concludes. As for Silva, he told media which schools are recruiting him the hardest:

2016 guard Breein Tyree (5 pts, 3 sts, 2 asts) - The St. Joes-Metuchen (N.J.) junior strung together three double-digit scoring performances for St. Joe's en route to their New Jersey Tournament of Champions title last season and sparked interest from Seton Hall, who were watching commit Ismael Sanogo of Newark East Side, Tyree's opponent. Displaying his football background, Tyree is an explosive athlete on the court and a tough competitor. He is nearly college-ready physically but has a developing jumper and a few parts of his game that need work. Expect Tyree to continue to gain high-major interest and some mid-major offers soon. Seton Hall expressed interest after his high school season ended and watched him workout in April.

2015 power forward Steve Enoch (8 pts, 4 rebs) - Enoch's recent recruitment blitz wasn't all hype - the kid can play. After a relatively slow start, Enoch infused energy into his teammates vocally and by his play. Enoch battled the 7-foot-3 Jean Marc Koumadje for parts of the game and things even got chippy. After running down the court, Koumadje would forcefully attempt to gain post position on Enoch. Not liking the physicality and not getting a whistle after a few trips down the court, Enoch came out hard on a screen being set by Koumadje and gave him a pop that kind of evened things out. It didn't take too long to notice that Enoch has that can't-teach motor on the court and apparently off the court: Steve stayed to watch the game after his and was vocally cheering on a few fellow Connecticut guys  by himself near a corner of the court. I'm sure college coaches took notice of these things, although most high-majors have already reached out over the last month. While a paint presence, Steve also ran the court once or twice and kept his defender honest by shooting a three over him. Tim Delaney-versatile.

2015 forward Horace Spencer (7 pts, 7 rebs) - Playing the four alongside fellow Seton Hall target Ernest Aflakpui, Spencer showed flashes of Desi Rodriguez in that he has high-flyer potential. Spencer's long wingspan and poachers mentality in the open court and even half court contributes to this. Horace was frustrated a few times on the interior but did show the willingness to put his back to the basket. His long frame gives him bounce and the quickness to run the open court as well as a rebounding advantage.

2015 forward Ernest Aflakpui (2 pts, 2 rebs) - Like Horace Spencer, Ernest struggled to establish himself in the paint yesterday. Definitely more of a power forward / center than Spencer or Chris Silva, Aflakpui likely excels more in an AAU/high school team environment than a showcase. We'll continue to track his play over the rest of the event.

2016 point guard Temple Gibbs Jr. (7 pts, 6 rebs) - The younger brother of Ashton Gibbs and Sterling Gibbs, T.J Gibbs shows flashes of both of his brother's games. He didn't hit his outside shots but showed hints of Ashton's deadly outside shooting with sound fundamentals and great backspin on his shot. Within four minutes of taking the court, Temple Jr. was the most assertive and commanding point guard I had seen yet (Gibbs played in the last game of the day). I don't believe he turned the ball over once and was never really a threat to while also slinging the rock around with precision. When it's all said and done, the 6-foot-3 lead guard may have the most physically imposing body of the three Gibbs. It's surprising to me that Seton Hall Prep and NJ Playaz product hasn't received more high-major offers, but just a junior a The Prep, he still has time to pile up offers. Gibbs recently picked up offers from Oklahoma, Miami (Fla.) and South Florida while holding a scholarship from Kevin Willard since September of 2012.

2015 guard Dupree McBrayer (7 pts) - Playing alongside Temple Gibbs Jr., the former The Patrick School guard headed to prep school displayed both shooting guard and point guard traits. Although his shot appeared off yesterday, McBrayer is an above average passer of the ball for a listed shooting guard and isn't just a spot-up shooter. Being watched by Rhode Island's Dan Hurley, where McBrayer visited in June, and other coaches, McBrayer showed an all-around game and was a few made shots away from having a top performer game. McBrayer was offered by Seton Hall in the spring and they have continued to recruit him after his reclassification following The Patrick School.

Seton Hall associate head coach Shaheen Holloway was at the Reebok Breakout Classic yesterday and was at court two for the second and third games while watching 2016 Tyus Battle and 2015 Markis McDuffie on court one in the first game. He was able to see all of Ernest Aflakpui, Horace Spencer, Dupree McBrayer, and T.J. Gibbs on the court at the same time while evaluating Steve Enoch, Chris Silva, Breein Tyree, and others in the game prior. Assistant coach Fred Hill was at the Hoop Group Elite Camp yesterday.

I'll be headed to Philadelphia University for the two game blocks after lunch. Look for more content tonight and Twitter as it happens.