Part two of Day Two coverage from the 2014 Reebok Breakout Classic. For content from the afternoon block of games, click here. Our Day One notebook is here.

A couple of Seton Hall targets put on great performances today with associate head coach Shaheen Holloway and assistant Fred Hill looking on while 2016 guard Temple Gibbs Jr. displayed perhaps the best outside shooting performance of the event by hitting officially five (I counted six) three pointers and going for 18 points and 4 assists in the court two 7 p.m. game. 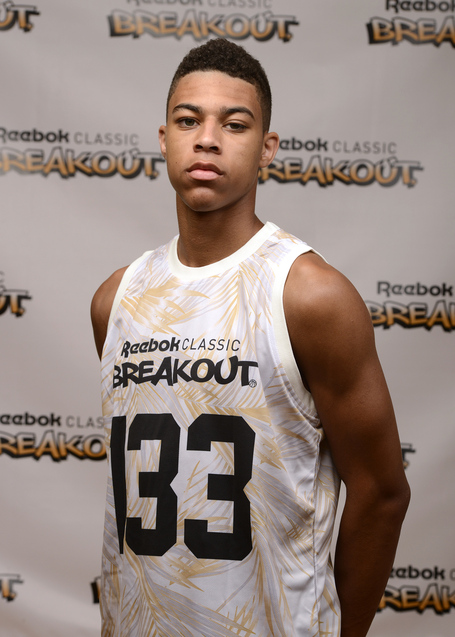 The top-rated Findlay Prep (Nv.) guard is already being hounded by the big schools: Kentucky, Arizona, Michigan - and impressed in one of the better games of the day. Thornton (pictured right) stole the show with 16 points as 2016 Gill St. Bernard's (N.J.) guard Tyus Battle put up six points in front of Shaheen Holloway and Fred Hill, who were sitting front and center for the game. Thornton overpowered the trio of Donovan Mitchell, Justin Simon, and Derrick Jones. Though Jones mustered 18 points after scoring an event-high 31 points in the afternoon block of games, Thornton contributed in all facets in a game that nearly resembled an AAU registered team game because of the competitiveness.

Another Seton Hall target, 2015 small forward Markis McDuffie (St. Anthony, N.J.) tallied 10 points and 7 rebounds as he supported Battle and Thornton. McDuffie has a versatile skillset and may need to decide which role is best for him: adding strength or improving three-point shot, or both. 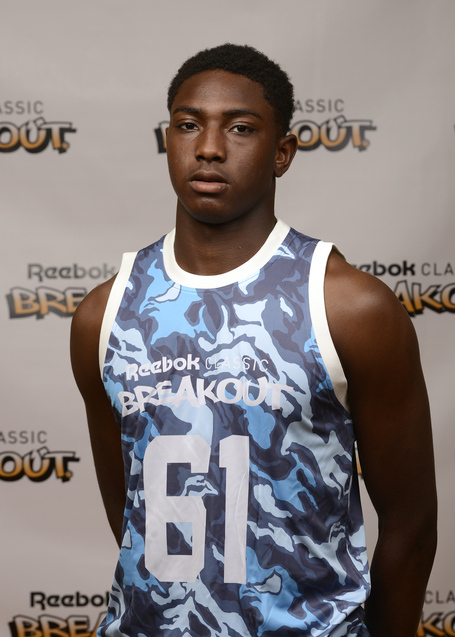 2016 guard Temple Gibbs Jr. (18 pts, 4 asts) - Another 2016 guard stood out today, this time during the 7 p.m. game on court two. Gibbs (pictured left) showed his point guard skill-set yesterday while just missing on a few three-pointers. Today, he showed that he can play the two-guard role as well, drilling five three-pointers and a long two-pointer in the process. Temple Jr. put on perhaps the best outside shooting display of the Breakout Classic just as I was asking myself if someone would do so. I noted yesterday that Gibbs has great rotation on his shot, and of course he hit every perimeter jumper that he took today while also finding teammates in the lane on multiple occasions and seemingly failing to turn the ball over for yet another game.

Helping Temple Jr. were 2016 guard Mustapha Heron (6 pts), who loves to get air and attack the rim when on the break or if he hits a lane and Dupree McBrayer, who contributed 7 points, 5 rebounds, 4 assists as Shaheen Holloway observed from mid-court. McBrayer is going to prep school for a year after graduating from The Patrick School (N.J.), the same school as Angel Delgado.

Other Seton Hall targets: 2015 forward Chris Silva (Roselle Catholic, N.J.) put up 8 points and 4 rebounds in the last round of games of the day as I was over on court one. Shaheen Holloway was up atop the court two bleachers chatting with Oliver and Orlando Antigua. On court one, 2016 guard Bryce Aiken (The Patrick School, N.J.) improved upon his performance from the last game I saw him play by scoring 8 points and getting his outside shot going. Villanova-bound Tim Delaney (Blair Academy, N.J.) once again displayed his all-around game with 14 points (3-4 3pt).