With the Big East currently possessing a bunch of question marks beyond Villanova, the conference as a whole needs the Hoyas to regain their spot as a perennial team being called out on Selection Sunday.

Despite starting strong (11-4, 3-1) and registering non-conference scalps against VCU and Michigan State last season, a five-game losing streak in Big East play and a lukewarm finish that included a loss to DePaul at Madison Square Garden barred Georgetown (18-15, 8-10) from the NCAA tournament for the first time since 2008-09.

Now in his eleventh season at the helm, John Thompson III will benefit from the Big East's top recruiting class and the return of center Joshua Smith, although his effectiveness remains to be seen. Smith started the season hot by scoring in double figures in seven of his first nine games, including 25 against Oregon in the Hoyas' opener, prior to missing the second half of the campaign due to being academically ineligible. Smith, who is listed at 6-foot-10 and 350 pounds, is also dealing with fitness/weight-related issues. If in game shape, he will be one of the most impactful players in the conference. 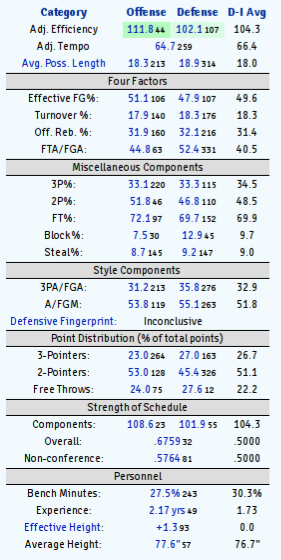 Although junior D`Vauntes Smith-Rivera loses his backcourt mate Markel Starks, the Hoyas should have enough talent to replace his 17.3 ppg and 4.1 apg. Smith-Rivera, rated a top-five NBA prospect in the Big East, will be joined inthe backcourt by Jabril Trawick, who averaged 11.6 ppg after missing five games mid-season due to a broken jaw compared to 7 ppg prior. Top-100 scoring guard L.J. Peak, who represented Georgetown at the Jordan Brand Classic National Game, will also look to contribute alongside these two returnees while local top-150 pure point guard Tre Campbell will back up Smith-Rivera.

On the wing and in the front court, Georgetown has more depth than last season, especially if Josh Smith plays a factor. Senior Aaron Bowen and sophomore Reggie Cameron are the Hoyas' two returning contributors at small forward, though the aforementioned Trawick played significant minutes at the 'three' last season. In the post, 6-foot-9 senior Mikael Hopkins hopes to receive support from Josh Smith, but will also benefit from the services of top-50 recruit Isaac Copeland and top-100 forward Paul White. Copeland is billed as more of a power forward that can play the three while White will do more damage at the four or center positions. In their forward reserves is freshman Trey Mourning, the son of Georgetown and NBA star Alonzo.

JT3 and his team will benefit one way or the other from a consistent Josh Smith. If he's ready to play, that's great. If he's not, then that's also fine as long as there is ample enough time to fill his 350-pound void. Georgetown dropped six of their first seven games without Smith starting last January, which probably isn't a coincidence.

If Georgetown is to improve upon last season's disappointment, the historically tough Hoya defense must be on display in 2014-15. While not poor at 107th in adjusted defensive efficiency, last year's mark was one of the softest defensive efforts Georgetown has shown in the KenPom era: It was their first finish below 56th outside of 2004-05 (98th). Georgetown finished in 61st or above in every other season besides these two seasons (JT3's first season and most recent) since 2001-02.

Another area of concern is outside shooting. The Hoyas finished 264th in the nation in point distribution from beyond the arc, with Markel Starks attempting the most long balls (57-175, 32.6%) on the team. Smith-Rivera (66-168, 39%) was the Hoyas' most potent threat last year and will likely be complemented by L.J. Peak and a more confident Reggie Cameron, who will stretch defenses.

In similar fashion to Seton Hall, the Hoyas return equal or more talent from their 2013-14 team but boast an even better recruiting class. Furthering this narrative, Georgetown looks likely to lock up a spot in the top half of an uncertain Big East while being in serious discussions for the NCAA tournament. With the Big East currently possessing a bunch of question marks beyond Villanova, the conference as a whole needs the Hoyas to regain their spot as a perennial team being called out on Selection Sunday. This team certainly has questionable facets, but a solid returning core and a stellar recruiting class may just be enough to turn the tide.