Taking into account what DePaul has lost from a poor 2013-14 team, it's hard to see them clawing their way out of the Big East basement this season.

Following Seton Hall's Tip-Off Party on Friday, which featured a bunch of local recruiting targets, we will now begin previewing the nine other Big East schools. This portion of the 2014-15 Seton Hall Basketball Preview Series will start at the bottom of last year's Big East standings (DePaul) and work its way up to the regular season champions (Villanova) on a Sunday-Wednesday basis. As such, a look at Villanova is scheduled to be published on November 2nd, a week prior to Seton Hall's exhibition against Caldwell College. The entire non-conference schedule can be explored here.

By the looks of it, Oliver Purnell's fifth season at the helm isn't going to turn out much better than his prior four. Sporting a 42-77 (9-57) record as DePaul's head coach, Purnell will be without his two most talented players from a season ago: forward Cleveland Melvin and guard Brandon Young. To compound things, role-playing wing Charles McKinney was dismissed from the team this summer and starting center Sandi Marcius graduated, leaving just two prominent starters in point guard Billy Garrett Jr. and forward Tommy Hamilton at Purnell's disposal from a 12-21 (3-15) finish in 2013-14. 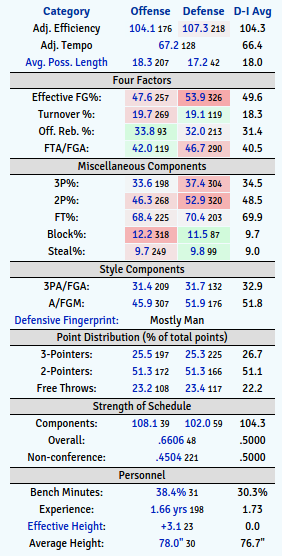 Luckily for the Blue Demons, DePaul used the 31st-most bench minutes of any school last season (perhaps due to necessity), which partially negates their lack of returning starters. Beyond Garrett Jr. and Hamilton, guard Durrell McDonald played 19.6 mpg last season and will fill in for Brandon Young. Up front, big man Forrest Robinson should see big minutes alongside Hamilton in an effort to replace Sandi Marcius. After seeing just 15 minutes of action during last season's non-conference, Robinson averaged 15.4 mpg over DePaul's final 15 games. Just like Hamilton, he is unusually potent from beyond the arc for a 6-foot-10 forward: 22-54, 41%, while Hamilton shot 19-53, 36% from deep.

If Oliver Purnell opts for a three-guard lineup, I would expect a combination of junior college guards Aaron Simpson and Darrick Wood, a former St. John's commit, to help Durrell McDonald replace Brandon Young. If a conventional small forward is to be used, Illinois transfer Myke Henry, who sat out last season due to transfer regulations, and senior Jamee Crockett project to see minutes at the 'three' in 2014-15. It's important not to forget 6-foot-5 R.J. Curington, who broke out with 15, 22, and 10 points in consecutive games against Seton Hall, Providence, and Georgetown last season, but also failed to see the court in 16 games.

Another newcomer, junior college transfer Rashaun Stimage, slots in behind Forrest Robinson and Tommy Hamilton in DePaul's forward rotation. The Blue Demons' only depth behind these three forwards is Greg Sequele, who averaged 10.2 mpg last season as a reserve off the bench.

Taking into account what DePaul has lost from a poor 2013-14 team, it's hard to see them clawing their way out of the Big East basement this season. If their trio of incoming junior college transfers play outstanding, perhaps they can finish 8th in the conference - at best.

The more relevant question for the Blue Demons is this: Will Oliver Purnell survive what's likely to be his fifth losing season out of five?