If you buy something from an SB Nation link, Vox Media may earn a commission. See our ethics statement.

A part of me is starting to wonder how much of Seton Hall's disappointing home loss to Butler was a post-DePaul "last place opponent" hangover effect. An impressive all-around performance against Xavier produced a 68-60 Seton Hall win at the Cintas Center on Saturday, the first road victory for any team there in nearly 11 months. The win made Seton Hall look far from the punchless team that was on display against Butler during the week.

It all started on defense (and a fortuitous Stephane Manga bank-shot) for the Pirates by way of an energizing 8-0 run that was indicative of Xavier coming off a week of rest and Seton Hall a disappointing loss. Seton Hall was successful at turning the tables early by getting out in transition off of harassing defense and/or missed Xavier shots -- the Musketeers usually thrive at getting out on the break. This early spurt did well to throw the Butler game far back into the Pirates' memory bank and Seton Hall remained consistent on defense in the half court all half, giving up 20 points at the break that weren't in transition.

The impressive dash out of the gates can also be accredited to a Seton Hall offense that was quick to correct Kevin Willard's post-Butler critique that the offense was just going through the motions. The Pirates spread the floor, passed the ball quickly, and worked hard off the ball within the arc with a purpose that is easily quantified by Seton Hall's A:FGM (16:21, 76%) ratio. If an average, a 76% A:FGM rate would rank 9-percentage points ahead of the next best team, Utah State. For me, it's critical that Seton Hall uses the first 15-20 seconds in the shot clock to set up the last 15-20 -- the Hall did this much more consistently against Xavier. There was a remarkable improvement in Seton Hall's offensive work rate during the opening portion of half court sets against Xavier.

As well as Seton Hall played in the first half, the visitors did well to escape a Kevin Willard technical foul and a late-half swing of momentum. Willard's technical actually stemmed a 9-3 Xavier run and has to be labeled as one of those techs that helps a team out. The technical preceded a Butler-esque two-turnover, two-missed-shot, one-head-scratching possession Seton Hall sequence that dented their momentum going into the halftime break, but slowed a Xavier surge.

Much like the start of the first half, Seton Hall was able to set the tone when opening the second period. Balling with a purpose, Fuquan Edwin (18 pts, 3, asts, 3 stls) played a helping hand in 8 of 10 Seton Hall points over the first 2:33 of the second half. A result of crisp ball movement, Edwin sank two three-pointers, and then set up surprise starter Stephane Manga with a transition dunk after creating a steal. Like in the first half, Xavier successfully answered Seton Hall's run, but the jump start was successful in keeping Xavier on their back foot when in transition. Normally lethal in the open court, Xavier was held to just two transition points in the entire second half.

Maintaining active hands on defense proved to be one of the biggest difference makers in the game. Seton Hall clogged up the lanes in their zone that Semaj Christon and Dee Davis wanted to drive in all game, resulting in a 14.8% steal percentage that if an average, would be surpassed by only VCU on a national scale. Another byproduct of top defense was a 21-7 points off turnovers advantage, including a 14-2 margin in the second half alone.

Despite all the positives, negatives, and important plays that occur in a basketball game, sometimes it's a major run that breaks a game open. For Seton Hall, their 14-4 run from 7:46 (under-8) to 3:15 (right after under-4) turned the game from a 1-point deficit to a 9-point advantage that effectively won the game. Lets take a look:

7:45, Coming out of timeout, Fuquan Edwin hits two free throws after questionable foul on inbound pass at under-8. 52-51 SHU

7:32, Stainbrook forced to take a dribble in paint, throws up off-balance shot. Equivalent of a steal. 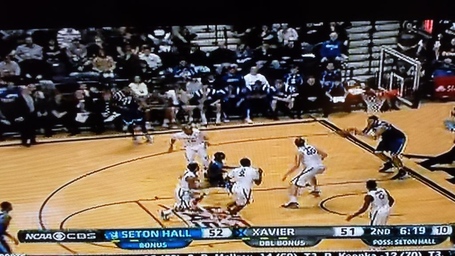 Geramipoor finds Sina on wing from under the basket, who sinks three-ball and is fouled by Christon, his fourth personal. Makes free throw. 56-51 SHU. 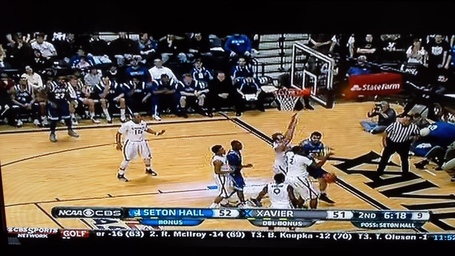 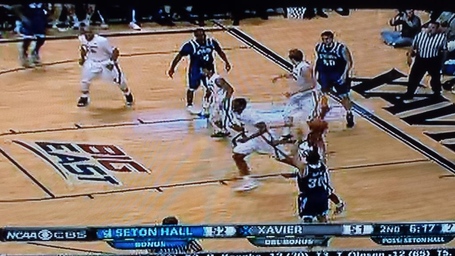 5:08, On the ensuing possession, Geramipoor sets a screen for Gibbs at top of arc, who dribbles to his right toward Edwin. 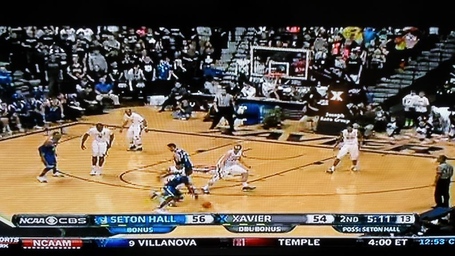 Xavier power forward James Farr plays way off of Mobley by helping down low with Geramipoor, leaving Mobley wide open for a straight away three, his third on the day. 59-54 SHU. 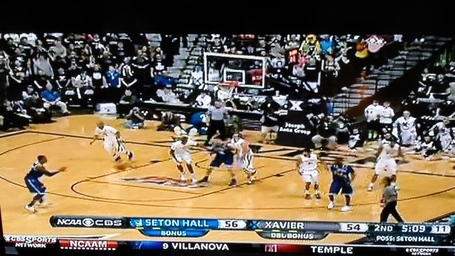 4:47, Myles Davis missed a three, possession retained after ball goes out of bounds. Xavier makes one of two free throws after Gibbs reach-in on next possession. 59-55 SHU.

4:18, Pirates try to get ball to Teague twice, but is closed out by Stainbrook. Mobley takes slightly further, slightly less open three pointer that misses. 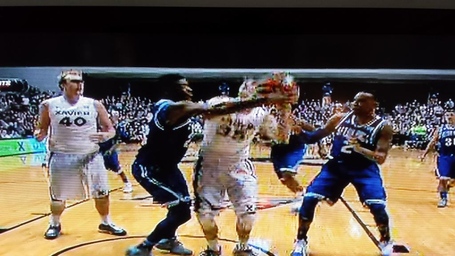 3:30, Early in shot clock, Dee Davis misses floater in lane, Edwin pushes in transition to Sina, who is fouled on the break. Sina hits both free throws after the under-4. 64-55 SHU, 14-4 run.

Kevin Willard has shifted his offense to focus on Fuquan Edwin more. Edwin has now scored 30, 20, and 18 since St. John's and has really turned up the defensive effort individually, and for Seton Hall as a team. On offense, Seton Hall has set a lot more screens over the last few games for Edwin to run around and he is hitting open shots off of them. Edwin has reshaped his definition of a "bad shot" into a "tough shot" because of his consistency when shooting them lately.

Haralds Karlis (2 asts, 15 mins) and Stephane Manga (4 pts, 2 rebs) played some important minutes in the absence of suspended Brian Oliver. Manga scored on a bank shot for the first basket of the game and on a nice dunk in transition from Fuquan Edwin. Karlis nearly had a very nice dunk in traffic and just missed on a three-ball early. Karlis contributes well on defense and off the ball on offense.

As Kevin Willard said post-game, Seton Hall did a good job of keeping Matt Stainbrook (16 pts, 10 rebs) off the low-block. Stainbrook featured on the very low block against Providence, making an impactful presence down low. Not so much on Saturday, though he did get his points. "The one place where we thought we could get on a break with them would be try to be a little more aggressive when Stainbrook had it in the high post. Against a zone, they flash him to the high post. He's such a good passer. But we thought if we could get after him a little bit, get him out of his comfort zone, we could get some steals on him. And I thought we got two or three steals that kind of led us to easy buckets that gave us a chance to kind of get some confidence. And it got him out of the low post, to be honest. Because when he's in the low post, he's as good as any center in college basketball."

Brandon Mobley (11 pts, 4 rebs) had another solid showing since being recognized as in a slump post-DePaul. Mobley made 3-of-6 three-pointers, one of which proved crucial in Seton Hall's win.

On Jaren Sina: "Jaren continues to impress me game after game. Even when he doesn't play well, he plays well. That's what I'm trying to get Patrik to realize and Jaren to realize. Your value is not just making shots. It's being a calming influence, being a guy who hustles, being a guy who plays smart basketball."

On Fuquan Edwin: "He played really, really well. I don't know how many steals they had him for, maybe four. In was really about nine."