Unofficial follow-up to The Hype Is Real

When I last wrote about Seton Hall's 2014 class and its members' respective performances during their high school seasons, all five commits and their four schools were cruising (The Hype is Real). Since, Ismael Sanogo, Isaiah Whitehead, Khadeen Carrington, Angel Delgado, and Desi Rodriguez have all played well, but some of their schools have faltered while others have advanced to various titles in New Jersey and New York.

The most talented member and indisputable poster-commitment of Seton Hall's 2014 class was also the first to finish his high school career. Isaiah Whitehead and Abraham Lincoln (N.Y.) were knocked out of the PSAL ‘AA' semifinals by Jefferson in a huge upset last Wednesday. Despite a disappointing end to Whitehead and Lincoln's season, Isaiah finished his career with one city title, was named to the 2014 McDonald's All-American game roster in late January, was selected to play in the 2014 Jordan Brand Classic yesterday, and was named Mr. Basketball in the state of New York this morning.

In the PSAL ‘AA' playoffs, Isaiah Whitehead scored 20 and hauled in 12 rebounds while Desi Rodriguez scored 19 and added 10 boards in a 97-62 first round win over Wadleigh. Whitehead then put up 26 points and had help from Rodriguez who contributed 16 points and 14 rebounds in an 84-67 second round defeat of Westinghouse.

Lincoln's final game came against Jefferson in the semifinals, a shocking 77-74 loss. The game was Desi's (15 point) and Isaiah's (18 points) last appearances in Railsplitter uniforms, but it also looks to be the final showing of head coach Dwayne "Tiny" Morton, who has a "good chance" of joining the Seton Hall staff this summer.

Isaiah Whitehead's next sighting will be at the McDonald All-American game on April 2nd at 9:30 e.t. on ESPN. The only McD AA heading to a Big East school is also one of two Big East-bound seniors playing in the Jordan Brand Classic on April 18th at Barclays Center. Here are two must-read features of Isaiah from the Wall Street Journal and NorthJersey.com.

Seton Hall's third commitment from New York also won his boro bracket but failed to take home a playoff title while achieving individual accolades in the process. Scoring guard Khadeen Carrington and Bishop Loughlin won the CHSAA Brooklyn-Queens tournament but bowed out of the CHSAA intersectional playoffs to Christ the King 72-61 in the title game.

Carrington reached the 2,000-point mark after scoring 24 against Christ the King in early February before posting point totals of 19, 26, and 42 against Holy Cross (x2, once in CHSAA BK/Q) and Christ the King in the CHSAA Brooklyn-Queens final. The 42 points against CTK came after a 67-49 loss to the Royals just two days prior. Khadeen was also named the CHSAA's Most Valuable Player mid-month.

Man I can't even explain tonight . I wasn't even on earth

After wrapping up the BK-Q title, Bishop Loughlin knocked off Iona 78-58 and St. Peter's 89-77 in the first two rounds of the CHSAA intersectional playoffs. Carrington scored 16 of his 22 points in the third quarter against Iona and then matched that performance with another 22 against St. Peter's. Khadeen scored 21 points for Loughlin in their 72-61 season-ending loss to Christ the King in the Catholic final on Sunday while 2016 target Rawle Alkins had 24 and 4 blocks in front of coaches from Cincinnati, Seton Hall, and St. John's.

Delgado scored 18 for The Patrick School against Cincinnati-bound Quadri Moore in late January before putting up point totals of 14, 14, 9, 11, 9, and 12 as TPS became one of the hottest teams in the New Jersey and found themselves ranked 5th in the state heading into the Union County Tournament. One of the best rebounders in the 2014 class, Delgado has been a consistent double-double threat for his school while displaying a smooth touch from the paint when on offense. Here is a scouting report of The Patrick School, which also has two underclassman guard targets on its roster.

Quadri Moore and Angel Delgado battled against each other in the UCT final at Kean after Delgado and TPS dispatched Roselle Catholic in the semis. Angel only scored 5 points but snared 10 boards and reportedly played a solid defensive game against Moore in a 62-54 win while being watched by Kevin Willard and Angel's main recruiter, assistant coach Oliver Antigua. Most recently, Delgado scored 11 and had 11 boards in a 75-49 state tournament win over Holy Spirit in the South Jersey Non-Public B semifinals that has set the Celtics up for a fourth meeting with Roselle Catholic (TPS 2-1) in the sectional final tonight. 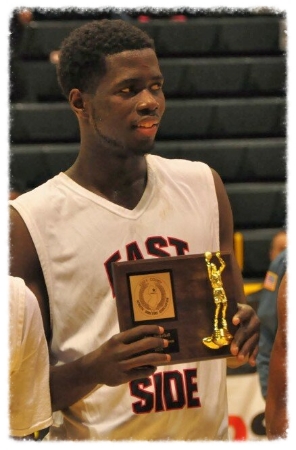 Ismael Sanogo has been an integral part of Newark East Side, the No. 1 ranked team in New Jersey for over a month now. Not known for high scoring totals, Sanogo's strength is contributing by way of points, rebounds, blocks, and steals. "Ish" scored a season-high 20 points against Seton Hall Prep in early February before separating his shoulder against Montclair Kimberly on the 8th that sidelined the wing for four games. Sanogo returned earlier than expected to play in East Side's 60-42 win over Seton Hall Prep in the ECT final (pictured right) that snapped The Prep's three-year title reign. His forte, Sanogo has filled up the stat sheet in many areas in league and state tournament games including back-to-back 17-point outputs in the second and third round of the North 2, Group 3 bracket.

After suffering a minor foot sprain against Orange in the North 2, Group 3 semis, Ismael returned yesterday to put up 9 points, 7 rebounds and 2 blocks in East Side's 54-25 rout of 3-seed Summit in the sectional final, the school's second straight sectional title. The Red Raiders advance to the Group 3 semis against the North 1, Group 3 winners Teaneck Wednesday at 8 p.m. at East Orange High School. A potential state final matchup with the winner of Ewing (Seton Hall offered 2015 Ewing guard Trey Lowe yesterday) and Delsea will be at the Rutgers Athletic Center on Sunday.

Ismael Sanogo and his team require two more wins to be crowned Group 3 state champions and receive a birth in the New Jersey Tournament of Champions. If The Patrick School and Angel Delgado knock off Roselle Catholic tonight, they will face the winner of St. Joseph's (Metuchen) and Paul VI on Saturday in Toms River for the Non-Public South crown and a birth in the Tournament of Champions.

Its sad that this was my last game at Eastside The memories made on this court will never be forgotten 🙌🙌 #BEastside pic.twitter.com/sHvfOtAwY4

Looking ahead, Desi Rodriguez is the last member of the 2014 class that has yet to sign with Seton Hall (he committed on December 23rd), something that he can finalized between April 16th and May 21st, the late period for seniors to sign NLIs. Interestingly enough, Rodriguez may not be the last senior to sign with Seton Hall, Kevin Willard did note in an early February Big East teleconference that the class may grow to six players: "We're bringing in right now 5 guys and maybe even bringing in 6," he teased.