Seton Hall to face Nevada in first round of Paradise Jam

Share All sharing options for: Seton Hall to face Nevada in first round of Paradise Jam

The bracket for the 2014 Paradise Jam was released this afternoon and with it, Seton Hall's opening round opponent.

The Pirates will take on Nevada (15-17, 10-8) of the Mountain West Conference in the first round on Friday, November 21st at 5 pm on CBS Sports Network. The other opening round game to be aired is Louisiana State - Old Dominion which follows Seton Hall - Nevada, the rest of the tournament's games will air on ParadiseJam.com. 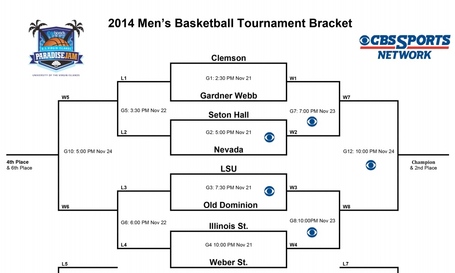 The Wolf Pack finished fourth in the MWC last season but posted a below .500 overall record that included a first round loss in the MWC tournament. Nevada loses two seniors to graduation in Deonte Burton and Jerry Evans and sophomore Cole Huff (12.4 ppg, transfer to Creighton) from a 2013-14 team that finished 146th in KenPom. Junior college transfer A.J. West averaged 6.8 ppg and 6.8 rpg at the 'five' last season after finding himself on Seton Hall's recruiting radar two years ago. West played with Stephane Manga at Monroe College and was coached by Dwayne "Tiny" Morton at Abraham Lincoln prior to going the junior college route.

If Seton Hall were to beat Nevada, it looks like their path to the Paradise Jam title game would go through Clemson, who arguably play the weakest team in the field, Gardner-Webb. The Tigers (23-13, 10-8) went all the way to MSG in last year's NIT and were set to return all of their talent prior to K.J. McDaniels' (17.1 ppg, 7.1 rpg) decision to enter the NBA Draft. Still, Clemson is likely NIT or NCAA-bound in 2014-15 and set up a huge potential game early on Seton Hall's schedule.

Kevin Willard's team will likely require two wins from their trip to the U.S. Virgin Islands for it to be considered successful. A sweep of opponents Nevada, Clemson, and LSU would maximize the effectiveness of the Paradise Jam on Seton Hall's non-conference schedule, which is to include games at South Florida and Georgia, and home to George Washington, Rutgers, and Mercer.