Share All sharing options for: Seton Hall poised to improve upon 2013-14 TV ratings

With Seton Hall's 2014-15 non-conference schedule freshly released last Monday and SouthOrangeJuice.com's Men's Basketball Preview Series set to start previewing schools next week, let's take a look back at how the Pirates fared TV ratings-wise on Fox Sports and how that may project for the 2014-15 season.

First off, major credit to Marquette blog Paint Touches for originally bringing this data to my attention in April. I highly recommend the read, although it's not required to follow along below, to see how the entire Big East's viewers/game and total viewers compared to their last season prior to the new Big East. The author also labels Seton Hall and three other Big East schools as "winners" from this past season. Here is a direct link to the data (Google Docs) used in the Paint Touches article and below.

Here's a look at the above data in graph form meant to show how viewers per game fluctuated over time: 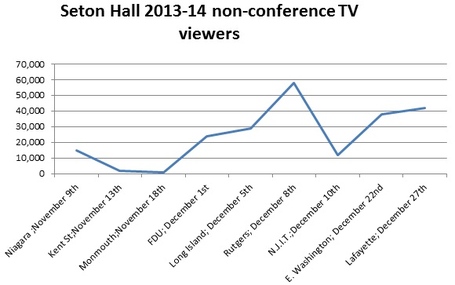 Compared to the league schedule (21 total games had data available due to games on CBS Sports Network): 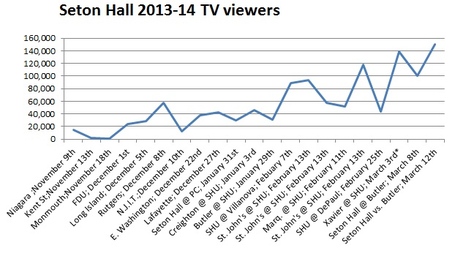 Looking ahead toward the 2014-15 non-conference schedule, how do you think Seton Hall's viewers on Fox Sports will differ? Outside of the three Paradise Jam games, which are set to air on CBS Sports Network if the Pirates advance in the bracket, here are some logistics for the non-league lineup:

On the surface, Seton Hall appears poised to shatter their TV ratings from last season. While an intrastate rivalry game, their trip to Rutgers last season brought in 58,000 viewers on ESPNU on a Sunday night during the NFL season. Last season's average viewership on ESPNU was between 120-160k, depending on the month. In comparison, ESPN2 averaged between 359-501k viewers during the 2013-14 campaign. It looks like a safe bet that at least two of the trips to Wichita State, Georgia, and South Florida will air on ESPN2/U with ESPN3.com as a last resort. This may come down to how well Seton Hall and its opponents are playing at the time.

It's tough to project how Seton Hall's freshman class (they moved in on Sunday, no longer "incoming recruiting class") will boost viewers during the non-conference schedule, but I can't foresee totals less than last season, which was arguably equal to or better than 2012-13 with ESPN. Coupled with two more attractive ESPN games (Georgia, Wichita State) and five of the six Fox Sports games taking place on a weekend (Seton Hall's non-conference viewers on weekends last season weren't that bad) and there appears to be many reasons to predict an increase in viewers this campaign.