On paper Georgia looks to slot in behind Wichita State as Seton Hall's second toughest non-conference game this season.

Following a meeting with South Florida, Seton Hall will travel 400 miles north to Athens to take on the SEC's Georgia Bulldogs as part of a two-game road trip in the southeast region of the country. The game is the first installment of a home-and-home series that returns to Prudential Center next season and is the first ever clash between the two schools. The game will tip at 6 p.m. the Sunday before Christmas, December 21st,  and will air on ESPNU.

This spring, Georgia head coach Mark Fox received an additional two-year add-on to the contract extension he received in 2011, ensuring the Bulldog boss of four more years to the five he has already coached in Athens. Last year, Fox led Georgia to their second 20-win season (20-14, 12-6) over that span, resulting in a second round NIT loss to Louisiana Tech.

On paper, Georgia looks to slot in behind Wichita State and before Clemson (and potentially LSU) as Seton Hall's second toughest non-conference game this season. However, the road trip to Athens will be lightened by the game taking place during winter break. Further, Georgia finished three spots behind the Hall in average attendance at on-campus venue Stegeman Coliseum (capacity 10,523) last season despite boasting an enrollment over three-times the size of the private South Orange, New Jersey school.

The Bulldogs are poised to return nearly all of their talent from a third place SEC finish that saw them tied with Kentucky at 12-6 in the conference standings, but ultimately losing out on a head-to-head tiebreaker.

Georgia was set to lose just starting center Donte' Williams due to graduation prior to starting small forward Brandon Morris being dismissed from the team this summer due to felony drug charges. Morris, who logged 25.4 mpg as a sophomore last season was projected to retain his starting role at the 'three' in 2014-15. 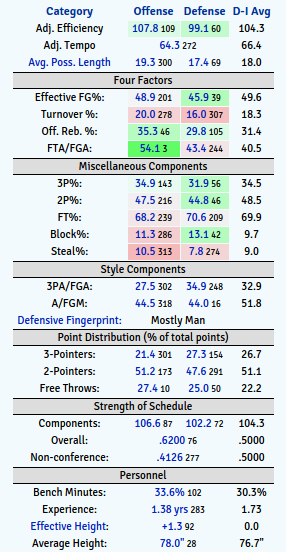 Interestingly, versatile 6-foot-7 junior wing Cameron Forte, who Seton Hall offered out of high school back in 2011, could be the one who fills the void left by Morris. If Mark Fox wants to go with a smaller lineup, he played a backcourt of Charles Mann - Juwan Parker - Kenny Gaines at times last season. Mann, who gets to the free throw line at a similar rate as Sterling Gibbs, will retain the reins as starting point guard while Kenny Gaines primarily played the volume-shooting two-guard role (57-152 3pt) last season. Juwan Parker came off the bench as a freshman at guard.

In the frontcourt, Georgia will look to replace Donte' Williams with a pair of 6-foot-8 seniors in Marcus Thornton and Nemanja Djurisic, who both saw 23+ mpg last year. Further, this is where Georgia's lone newcomers could make an impact. Mark Fox brought in a pair of freshman centers in 6-foot-8 Yante Maten and 6-foot-10 Osahen Iduwe, the former of which was recruited by the likes of Indiana and Michigan State after being named the 2014 Gatorade Player of the Year in Michigan.

Overall, the Bulldogs project to build upon their 72nd finish in KenPom, 74th RPI rating, and subsequent NIT berth. With over 77% of their scoring back from the 2013-14 season and four starters projected to be seniors or juniors, Mark Fox and his team must be eyeing the next step in 2014-15: a second NCAA tournament bid in six seasons.

Next week, the non-conference portion of the Seton Hall Basketball Preview Series will conclude with a breakdown of Maine, who travel to Walsh Gym for a post-Christmas clash days before the Big East schedule starts on New Year's Eve.