It appears a foregone conclusion that Maine and new head coach Bob Walsh will struggle mightily to improve upon their woeful 338th finish in KenPom and 330th-best RPI from a season ago.

Last and most likely least on Seton Hall's 2014-15 non-conference schedule are the Maine Black Bears, fresh off a 6-23 (4-12) season in the America East Conference. Maine travels to Seton Hall's South Orange, New Jersey campus for a noon tip on Saturday two days after Christmas for the lone contest at Walsh Gym this season.

Maine's basement finish in the America East last season prompted a buyout of 10-year head coach Ted Woodward's contract this April. Woodward finished his decade-long tenure at UMaine with a 105-178 record against D-1 opposition and nine straight first round exits in America East conference tournaments since reaching the final in 2004, his first season.

In the first and only meeting between these two schools, Woodward's squad lost 76-49 at Prudential Center in November of 2012, the night that Patrik Auda broke his foot.

Former Providence assistant Bob Walsh has taken over at the helm of Maine, and boy does he have his work cut out for him after the Black Bears lose two of their top three scorers due to transfer. 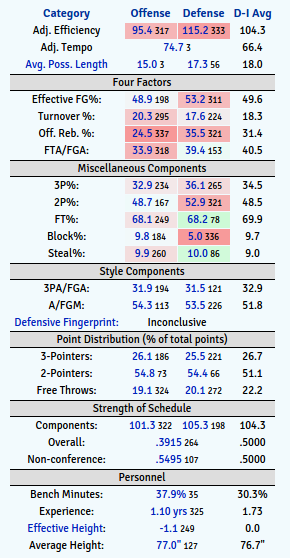 While guards Xavier Pollard and Dimitry Akanda-Coronel have both transferred and reserve forward Killian Cato has left the program, it technically could have been worse for the Black Bears. Shaun Lawton, who projects as seeing significant time at point guard this season, was also set on transferring this spring prior to reneging on his intention to leave Orono. Lawton looks to split time as Maine's lead guard with sophomore point guard Troy Reid-Knight or he may play more two-guard if needed.

Maine's other two returning starters from last campaign are shooting guard Zarko Valjarevic (62-146 3pt, 43%) and 6-foot-7 forward Ethan Mackey. The latter will be joined by 6-foot-8 returning junior Till Gloger in the paint.

It appears a foregone conclusion that Maine and new head coach Bob Walsh will struggle mightily to improve upon their woeful 338th finish in KenPom and 330th-best RPI from a season ago. Xavier Pollard and Dimitry Akanda-Coronel were considered Maine's two lone 'significant contributors' by KenPom and will be hard to replace from a team that was quite poor when they did have those two players at their disposal.

The only realistic chance Seton Hall has of dropping this game is if they are looking four days ahead to their clash with St. John's on New Year's Eve and Bob Walsh works some real magic during his first season as Maine's head coach.

This concludes the non-conference portion of our 2014-15 Seton Hall Basketball Preview Series. We will start taking a look at the other nine Big East schools starting next Sunday in a Sunday-Wednesday format (two schools per week) leading up to Seton Hall's exhibition against Caldwell College on November 12th.

For a look back at the rest of Seton Hall's non-conference schedule, explore below: