The Peacocks finished 233rd in KenPom and 231st in RPI, both of which should be improved upon with all but one of their key players returning from last season.

This week's preview of long-time in-state foe Saint Peter's is the three-quarters mark of the non-conference portion of our 2014-15 Seton Hall Basketball Preview Series. The previous eight entries that breakdown the likes of archrivals Rutgers, the entire Paradise Jam field, and most recently Wichita State, can be explored at the bottom of this page.

Most of 9th-year head coach John Dunne's key players return from Saint Peter's 14-17 (9-11) outfit last season that knocked off Seton Hall in overtime at Prudential Center. Point guard Trevis Wyche is back after logging just under 30 mpg as a freshman last season while starting shooting guard Desi Washington and center Marvin Dominique return for their senior seasons in Jersey City. Power forward Quadir Welton is also back, joining Dominique in a somewhat undersized front court. Graduated wing Chris Burke is Saint Peter's only key loss from last campaign, but as you'll see later, the Peacocks have plenty of guards and wings to replace him. 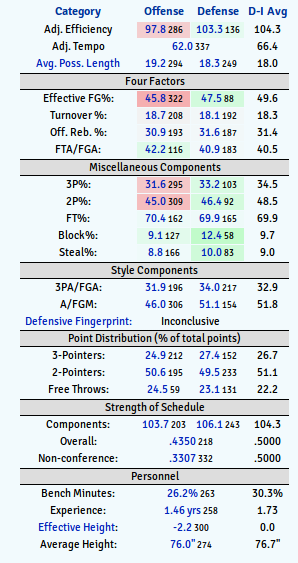 In addition to four returning starters, 6-7 returnee Elias Desport will likely fill in at power forward off the bench. Beyond Desport, Dominique, and Welton, John Dunne only has freshman forward Rodney Hawkins in his frontcourt arsenal, who will become eligible after the first semester. Like last season, the Peacocks are quite thin in the frontcourt, but they were able to hide that deficiency well against Seton Hall as Marvin Dominique and Quadir Welton combined for 35 points compared to Gene Teague and Brandon Mobley's 23. Saint Peter's 'effective height' was ranked 300th in the country last season according to KenPom.

In the backcourt, sophomore Trevis Wyche will be covered by senior Jamel Fields at point guard, who may see competition from redshirt sophomore Chazz Patterson of Trenton Catholic. Patterson sat out last season after seeing time in 28 games as a freshman. Desi Washington will log the majority of the minutes at shooting guard.

Replacing Chris Burke at the 'three' will a combination of three new guys and one veteran Peacock. Freshman wing Elisha Boone, who played with Desi Rodriguez and Isaiah Whitehead at Abraham Lincoln will compete with a pair of new junior college guards/wings in Simeon Dennis and Travis Hester. Dennis averaged 16 ppg at Northern Oklahoma JC and will be looked upon for scoring, while Hester primarily brings outside shooting to the table (83-213, 39% last season) for John Dunne. A combination of these newcomers will likely battle with senior Tyler Gaskins, who came off the bench for the since departed Chris Burke last season.

Hester and Dennis (who is actually a better 3-point shooter: 81-185, 43.8%) may prove crucial for Saint Peter's, who lack outside shooting from anyone not named Desi Washington.

The Peacocks finished 233rd in KenPom and 231st in RPI, both of which should be improved upon with all but one of their key players returning from last season. John Dunne says his team will be "completely different", which is hard to imagine due to a lack of personnel turnover and his teams having pretty consistent track records statistically: All eight of his SPC teams have finished lower than 285th in offensive efficiency while his approach is to clamp down on defense, resulting in two squads that were in the top-25 of defensive efficiency. On average, Dunne's teams at Saint Peter's have finished 165 places higher in defensive efficiency compared to the same category on offense.

If Seton Hall is lucky, they will play an improved Peacocks team that finishes somewhere in the 150-200 RPI range, which is somewhat neutral, assuming the Pirates don't drop their second inexcusable game in a row to their long-time opponent. Unlike John Dunne, I think that Seton Hall head coach Kevin Willard can state that his team will be completely different when the two schools meet in December.